Are you ready for a Guided Serefiye Cistern Tour?

Let’s have a small flashback to this magnificent cistern! The Byzantine Emperor ordered its construction between 428 and 443 with the purpose of storing fresh water for the city! And for centuries, the Serefiye Cistern met Istanbul's water needs. You will be amazed with the architecture and stories of this place!

It is very easy to visit Serefiye Cistern with the Istanbul Tourist Pass.

Istanbul Tourist Pass guides will inform you about this magnificent place! Get ready to hear lots of interesting stories about the cistern! It will be very memorable for you!

About The Guided Serefiye Cistern Tour

Instant confirmation -  The tour doesn't require a reservation in advance.

Discover the source of water for the baths of historical buildings such as the Great Palace, Nymphaeum, and Zeuksippos back in the day.

Enjoy the history with guideance

See and be amazed by the 360-degree Projection Mapping technology, used for the first time in Turkey for its visitors.

Social - Distancing is maintained in museums

Limited Visitors - To reduce crowds, the number of visitors is limited

After 8 years of restoration, the Serefiye Cistern is now open to visitors and hosts many concerts and exhibitions.

The tour starts at the main bus stop for the Big Bus Tour Company at Sultanahmet Square. Look out for the dark red double-decker buses. It's about 20 metres (65 ft) in front of the Hagia Sophia Museum.

The tour starts at the stop of the Big Bus in Sultanahmet. Click on Get Directions above to find the location.

You need to be at the meeting point at least 10 minutes bofore the start time of the tour.

All 60+ Attractions
Buy a Pass

All About Guided Serefiye Cistern Tour

Şerefiye Cistern is one of the best places to visit in Istanbul with its rich history and breathtaking structure. It is always very interesting for tourists and domestic visitors to explore this historic structure located in the underground of Istanbul.

Şerefiye Cistern, completed during the Byzantine period, has been standing for many years and synthesizing many cultures. With the Istanbul Tourist Pass, you can get the opportunity to visit this historical building with privileges such as a fantastic guided tour where you can explore the cistern with a professional guide.

The Byzantine Emperor Theodosius II built Şerefiye Cistern in 428, and its construction was completed 15 years later. The purpose of constructing the cistern was to store water from a water source called the Bozdoğan Arch. At the time, it was essential for the states that govern Istanbul to provide water supply to the city's people.

The location of the cistern built was called Şerefiye, and the cistern took its name from it. After the Byzantine Period, with the conquest of Istanbul by the Ottoman State, Şerefiye Cistern remained under the control of the Ottoman Empire. In the 19th century, a mansion named Arif Pasha was built on top of Şerefiye Cistern. In 2010, the structure above the cistern was demolished, and a magnificent historical structure appeared underneath it.  Don't forget to add this historic structure that traces back to the Ottoman and Byzantine Empires to your Istanbul travel itinerary!

The Architecture of Şerefiye Cistern

There are many historical tourist attractions in Istanbul, and the Şerefiye Cistern has become one of the most popular places for visitors with its fascinating structure since 2010. This structure, which is 1600 years old, was used as a water tank for centuries. It has undergone many restorations and remains standing. The architectural structure was specially built in the Byzantine Period as a water source, but it later lost this feature.

Şerefiye Cistern, as an underground structure supported by solid and aesthetic columns, fully preserves the historical spirit's image. The cistern is an architectural building with a height of 11 meters, designed as 24x40 meters. The powerful columns supporting the structure consist of 32 of them, and there are 45 sailing vaults in the structure.

The Cistern marbles are composed of Marmara Island's special marbles, and its interior is covered with a unique waterproof substance. When you examine the design, you can see that its corners are curved to stabilize the water pressure.

If you want to explore the best places to visit in Istanbul, Şerefiye Cistern is one of them! With the Istanbul Tourist Pass, you can see this very newly emerged cistern with more information from trained, professtional tourist guides!

The feature that makes Şerefiye Cistern one of Istanbul's most popular tourist attractions is that it combines history and technology. The building incorporates the 360-degree Projection Mapping technology, used for the first time in Turkey for its visitors. You can observe the structure, a precious museum, and unique underground architecture to the smallest detail with this new technology.

The Projection Mapping show integrated into the Şerefiye Cistern consists of 10 parts and shows the walls, columns of the structure, and the entire space in 3D. If you are interested in history and not fed up with exploring, you should try visiting the cistern with projection technology!

If you are looking for a historic building for your Istanbul trip, don't forget to add underground structures to your Istanbul travel itinerary. With these unique features, Şerefiye Cistern is one of Istanbul's most fascinating historical tourist attractions. By using your Istanbul Tourist Pass, you have the opportunity to visit other unique underground architectures such as the Basilica Cistern without losing time and paying extra! 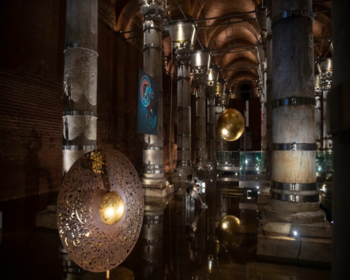 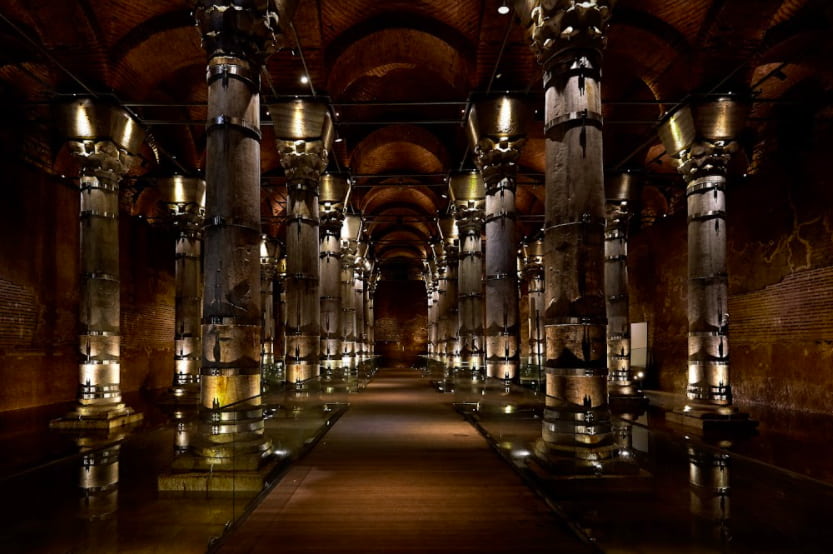 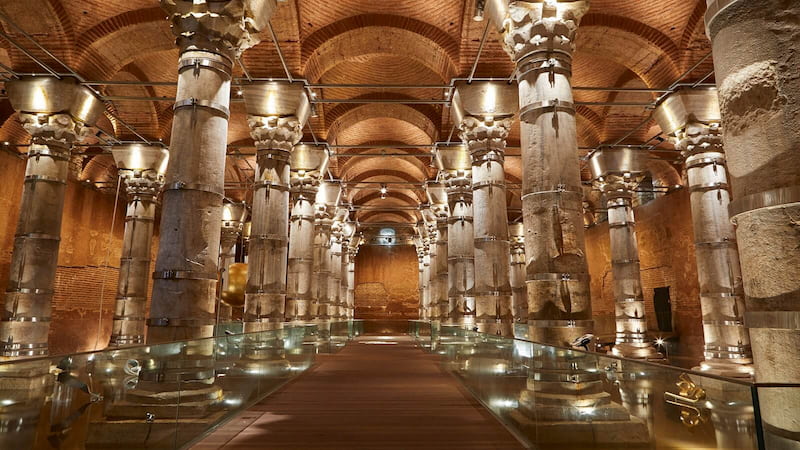 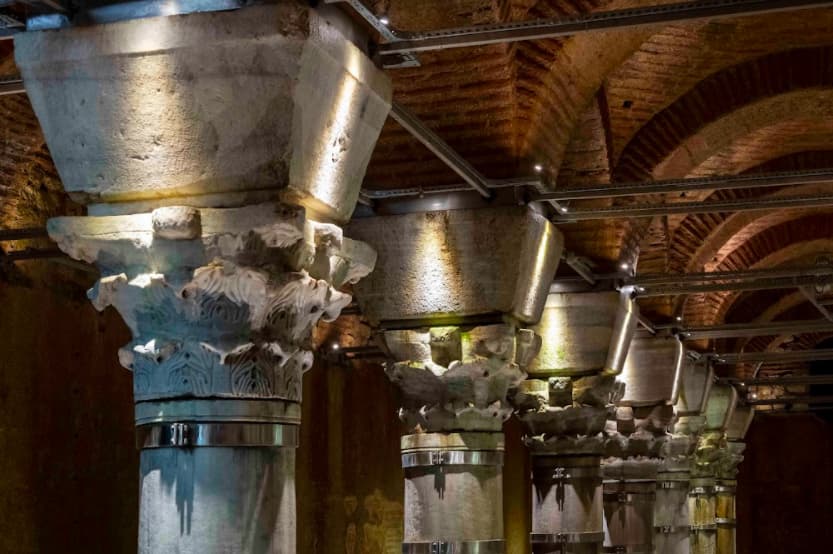 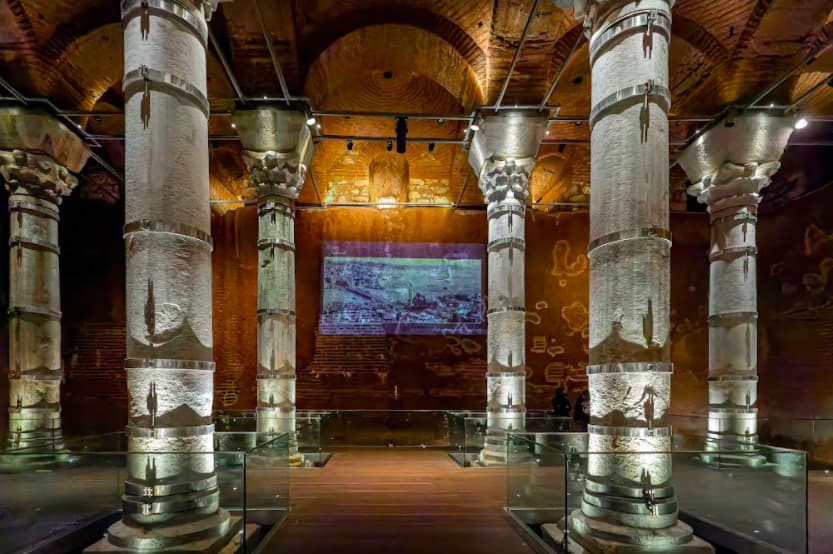 Why Should I Visit the Şerefiye Cistern?

Although Şerefiye Cistern is almost as old as Istanbul with its approximately 1600-year history, it reappeared in 2010. You can have a journey back in the history of Istanbul.

What is Included in the Tour for Şerefiye Cistern?

While visiting the unique underground structure, you can witness a detailed historical film, which you can watch in detail at a 360-degree angle. In addition, an experienced guide will be telling you about the Şerefiye Cistern and what is inside.

Can I Get in Serefiye Cistern Museum with Istanbul Tourist Pass?

No, this attraction cannot be accessed directly by presenting the digital Pass at the museum.

When I Can Join the Museum Tour with a Guide?

What are the Working Hours and Days to Visit Şerefiye Cistern?

Şerefiye Cistern Museum accepts visitors every day from 09:00 am to 19:00 pm.

One Pass For 60+ Attractions