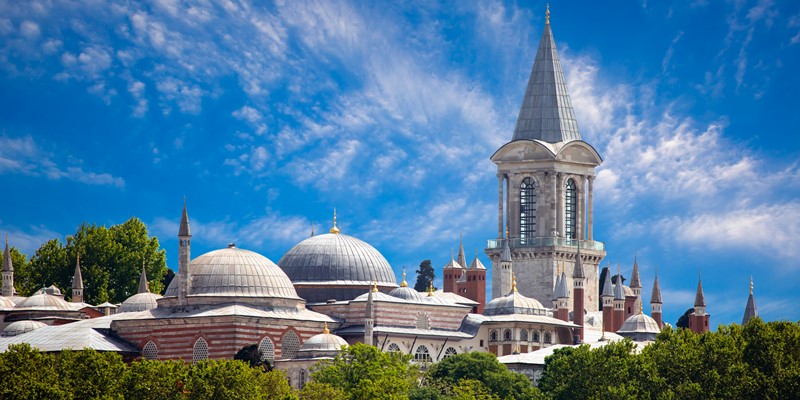 TOPKAPI PALACE: A glimpse of life and luxury during the Ottoman Empire

In the 1600s, Evliya Çelebi, a famous Ottoman author and traveller, said of Topkapı Palace: "Never hath a more delightful residence been erected by the art of man."

See it for yourself and get the most out of your visit to Topkapı Palace, the primary residence of the Ottoman Sultans for nearly 400 years, by joining our expert guides on a tour as they explain the fascinating history of this palace.

Topkapı Palace has many unique collections on display including weapons of the Ottoman Army, beautiful fabrics, jewels and art, as well as an amazing collection of Chinese and Japanese porcelain.

There is even a Holy Relics Chamber which contains personal items of the Prophet Muhammad, the staff of Moses and the sword of David, to name only a few. What a collection!

The most visited museum in Turkey, Topkapı Palace is an absolute must-see while you're in Istanbul so add it to your itinerary now!

We know your time is precious on holidays so join us for a guided tour at Topkapı Palace and skip the ticket queue.

An amazing skip-the-line guided tour of Topkapı Palace including the exterior and interior courtyards, all rooms and exhibition halls but EXCLUDING the Imperial Harem.

If you would like to visit the Harem, you can purchase a separate ticket at the ticket booth outside the Harem once your guided tour has finished.

Avoid paying the €17 tour fee to the Topkapi Palace Museum and skip the ticket queues with Istanbul Tourist Pass.

The approximate duration is 75 minutes

The tour starts in front of the Carpet Museum (Halı Müzesi), opposite the entrance to Topkapı Palace. Please meet the guide there.

Take the T1 Bağılar - Kabataş tram and get off at Sultanahmet station. Topkapı Palace is an easy five minute walk away, behind the Hagia Sophia Museum.

Topkapi Palace is quite worth a visit. Topkapi Palace is truly an imposing building worth visiting. The place to visit in Istanbul is definitely Topkapi Palace, if you plan to travel to this beautiful city on the Bosphorus. The palace is the heart of Istanbul, both locally and historically, so this place should not be missed. Topkapi Palace is located in the most beautiful part of Istanbul, on the slope below which the Bosphorus meets the Marmara Sea and where the Golden Horn separates from the Bosphorus. Sultans, their families, ambitious courtiers, eunuchs and harem keepers lived in the palace between the 15th and 19th centuries, when Istanbul was the seat of the Ottoman Empire. What was the Topkapi Palace used for? In the 15th century the palace was used as the main residence and administrative seat of the Ottoman sultans. Topkapi Palace is important because it served the rulers of the Ottoman Empire for 400 years. 25 Sultans passed through it! Today, it represents one of the greatest cultural and historical treasures of Turkey. By the Kemal Decree, Topkapi was converted into a Museum in 1924. Enjoy discovering the beautiful palace. This experience could be an unforgettable life adventure if you let the experienced istanbultouristpass.com guides guide you through this fairy tale.

When was Topkapi Palace built?

Topkapi Palace was built by Sultan Mehmed II shortly after his conquest of Constantinople in 1453 and he lived there until his death in 1481. All subsequent sultans also lived in this unusual building until the 19th century when they moved to the magnificent European villas and palaces built on the banks of the Bosphorus. The construction of the palace lasted from 1472 to 1478, although repairs and decorations were carried out until the 19th century.

What does Topkapi Palace contain?

Topkapi Palace is really big, covering an area of about 700,000 square meters. What to see in Topkapi Palace? When visiting Topkapi, you can see the palace, which consists of two basic organizations: the outer and inner palaces and the Harem. Topkapi has several separate rooms that have been used by rulers for various purposes for centuries. There are private rooms, pavilions, rooms for soldiers, barracks, a large kitchen, a large library, loggias, offices and prison rooms. Before passing the first section, called the Imperial Gate, be sure to look at the beautifully decorated stone fountain in the outer square. It is a small rectangular structure with five smaller domes made in the rococo style of 1728. Topkapi Palace paintings present a collection of imperial portraits housed in the Sultan's chambers. The painted portraits depict all Ottoman sultans.

Surrounded by tall walls, the first courtyard functioned as an outdoor area or park and is the largest of all the palace courtyards. Some historic structures of the First Courtyard no longer exist. When you pass through the imperial door on the right, you will see a space known as the former Ministry of Finance. There are two niches on the door and an inscription of the Qur'an. To the left of it is the Byzantine Church of Hagia Eirene.

The second gate was built in 1468, during the time of Mehmed II the Conqueror, and was restored during the time of Suleiman the Magnificent, similar to European construction styles. The premises behind this second gate served, in present terms, as the logistics and administration division, for affairs concerning the administration of the empire. To the right of this second gate you can see the large kitchen. Next to the kitchen on the right are barracks and pantries, and further along the trail you will find the imperial barn and the Besir Age mosque. On the left, there is the Topkapi Palace tower of justice. A panel of officials met there to discuss state issues and the Sultan, often hidden behind a gold screen high up in the wall, would tap on the screen if he disagreed with their decisions.

These were imperial chambers and every detail of life in the Harem was characterized by tradition, obligation and ceremony. The word 'harem' literally means 'forbidden' or 'private'. Topkapi Palace’s Harem was the private haven of the Ottoman Sultan and his extended family at Topkapi Palace. Here, the word ‘harem’ also referred to the physical space in which he and his family members lived. The first Harem was deliberately built by Murat III in 1574 and later upgraded by the Sultans. Apart from the Sultans, the only ones in the Harem were the eunuchs who guarded him. You will have the opportunity to see beautifully decorated rooms, with canopies, marble fireplaces, flower tiles on floors and small fountains. You can get ticket with guided tour in Topkapi Palace.

Topkapi Palace Gate of Felicity is the entrance to the third courtyard, which consists of a private and residential part of the palace. No one could walk through this door without the Sultan's approval. The gate was built in the late 15th century. Under the vault of this third courtyard is the "Preston Hall" from the period of Mehmed the Conqueror, which is where he met with foreign MPs and viziers. Behind this hall is the library of Ahmet III, made in 1719. The most valuable of the entire Topkapi complex is the royal treasury, which contains the most valuable pieces of jewelry, weapons, diamonds and emeralds, with ruler's uniforms, kaftans, sultan uniforms and dresses.

Here you will be amazed by the beautiful tulip garden. On the edge of the terrace is a raised tower, once a pharmacy of the imperial palace, and a little further is a pavilion of Mustafa pastures. To the left of the garden is a small terrace with a swimming pool. At the end of the terrace there is a view of the Golden Horn Bay and the Bosphorus. You’ll also find the most beautiful pavilion of Topkapi Palace there, "Baghdad Pavilion", built in 1638 in honor of the occupation of Baghdad. The walls of the pavilion are lined with ceramic tiles and the inside of the dome is made of deer leather and gold. The windows are of ivory and pearl.

Topkapi Palace opens at 10am in the morning. Topkapi Palace closes at eight o'clock. Topkapi Palace best time to visit is Monday morning. Wednesday and Friday are quite crowded because the Blue Mosque is closed until 2:30 pm. Weekends and holidays are also crowded. Topkapi Palace visiting tips: We encourage you to buy your ticket online because of the large crowds or try to get there as early as possible to avoid the crowds. The distance between Istanbul Airport and Topkapı Palace is 34 km, which takes about an hour. Topkapi Palace to Grand Bazaar is just two stops by public transport. If you walk, it takes 15 minutes. You can also use our chat service if you would like to get some additional information at istanbultouristpass.com.

When you choose one of our services and excursions, you have the option of credit card payment by reliable international payment systems. The istanbultouristpass.com brand has been on the market for many years an is renowned for its quality and professional service. The services we provide to groups, information, questions and experience can be accessed directly through our online service. You can always contact us through our chat service on istanbultouristpass.com and get all the information you need. You can also visit the Blue Mosque museum and discover the culture of the Ottomans or go to Turkish and Islamic Arts Museum to see traditional carpets, wood, glass, ceramic and stone artifacts.

After spending all day exploring Ottoman history and culture, how about watching an amazing evening show? Enjoy the Whirling Dervishes Show which is an 800 year-old tradition. The show is free with Istanbul Tourist Pass. If you have extra time on your Istanbul trip and you are still interested in Ottoman culture, we recommend the Bursa Day trip. The city of Bursa is as beautiful as Istanbul (but much less busy!) and was an important place for the Ottoman Empire.