Are you ready to discover the Hagia Irene Church?

In this attraction, you will discover Hagia Irene, a Greek Eastern Orthodox church!  It was built as the first church in Constantinople. The church has to be rebuilt due to several occasions like fires and earthquakes. Because of its excellent acoustics, it is now one of the most popular places for classical music concerts.

Discover Hagia Irene Museum which is one of the best places to visit in Istanbul, you will enjoy the combination of the modernity and tradition!

Be amazed by the first church of the Byzantine Empire.

Hagia Irene or Holy Peace, was a Greek Eastern Orthodox church built under the orders of Emperor Constantine I over the ruins of a pagan temple as the first church in Constantinople. It served as the church of the Patriarchate until the Hagia Sophia basilica was built.
Due to fires and earthquakes, the church suffered much damage and was restored on several ocasions.

After Constantinople was conquered by the Ottomans, the chuch was relocated inside the walls of Topkapı Palace and although it was not converted into a mosque as most other churches, it still suffered damage at the hands of Ottoman soldiers when they used the building as an arsenal and warehouse.

Before the collapse of the Ottoman Empire, it served as a Military Museum for 70 years and was then closed for a long period. In 2014, it was restored and reopened as a museum. Today, it is a popular location for classical music concerts because of its excellent acoustics.

The tour is included in Topkapi Palace Guided Tour.

The approximate duration is 5 minutes.

The palace is located close to the Sultanahmet Square, next to the Hagia Sophia museum. It can be reached via the T1 Tram Line and then walking 5 minutes to the Museum.

The tour is included in Topkapi Palace Guided Tour.

Hagia Irene Museum is one of the best places to visit in Istanbul, which combines modernity and tradition, and reflects the historical past of Istanbul in the most beautiful way.

This historical building, which is used today as a museum, is known as the first church of the Byzantine Empire. With its unique architecture and imposing structure, it is one of the most impressive tourist attractions located in the heart of the city.

Constantine, one of the great emperors of the Roman Empire, wanted to build a church for himself and many other buildings at the beginning of the 4th century. The Hagia Irene Museum was built for this purpose and was named after Penelope, a saint who lived at that time. It has remained one of the critical buildings located in the city throughout the Roman Empire. After Istanbul fell into the hands of the Ottoman Empire, it was restored and used for different purposes.

Are you a traveler interested in history who wants to explore the unique structures of Istanbul? Hagia Irene is also the first structure of the Ottoman Empire to be used as a museum in the 19th century. So, be sure to add Hagia Irene Museum to your Istanbul travel itinerary.

History of the Hagia Irene Museum

Hagia Irene, which is of great importance as the first museum of the Ottoman Empire, leads to the most significant tourist attractions in the city. During the Ottoman Empire, it was used for various purposes instead of as a church or a museum. With the change of its architecture during the reign of Ottoman Sultan Mehmet II, the building began to be used as an internal arsenal. By the 19th century, many arsenals located there had become unusable and antiquated.

During this period, double-winged stairs were built into the structure, and its internal layout was significantly changed. Another thing added during the Ottoman period is the inscription dating 1726, which is still found on the main door. In 1846, the old church, now turned into a new museum, was divided into two parts. These parts include the "collection of antiquities" and the "collection of ancient weapons."

By 1869 the museum was officially turned into an Ottoman museum. In 1875, the archaeological artifacts found in Hagia Irene Museum were taken to the Tiled Kiosk. Later, when the First World War started, the collection of weapons in the museum was improved. Later, by 1930 it acquired the title of the first military museum of the Ottoman Empire.

With the privileges of the Istanbul Tourist Pass, you can go on a historical journey to Hagia Irene Museum and get lots of information. The place is included in the Istanbul travel plans of many tourists from abroad with its cultural synthesis and historical significance.

Architectural Structure and Transformation Over Time

Hagia Irene, which features the long history of Istanbul in its architecture, has been standing for centuries. This impressive building has a mysterious architecture with its structure that does not differ from the classical Roman houses of worship.

One of the features that make Hagia Irene Museum unique is that it is the only building with an atrium that dates back to the Roman era. An atrium is a courtyard often seen in temples and sacred places dating back to the ancient Roman Period.

The church, built by Constantine the Great, was created with the shape of a "three-nave basilica" on the floor and the form of a Greek cross on the top.

Hagia Irene faced many disasters to this day, but it has stood firm, and it is a magnificent tourist attraction for people from all over the world. An earthquake in the 700s destroyed the original building, and it was later rebuilt. During this period, new mosaics and motifs were added to the structure.

The preservation of the appearance of the domed basilica was an important point during the restoration. These motifs and mosaics were largely untouched in the church during the Ottoman Period and were used as a museum.

If you are interested in such elegant structures, you should also see Topkapı Palace, one of Istanbul's most popular tourist attractions. In the reign of the Ottoman Sultan Mehmet II, the construction of Topkapı Palace started. Visit both of these beautiful structures in Istanbul. 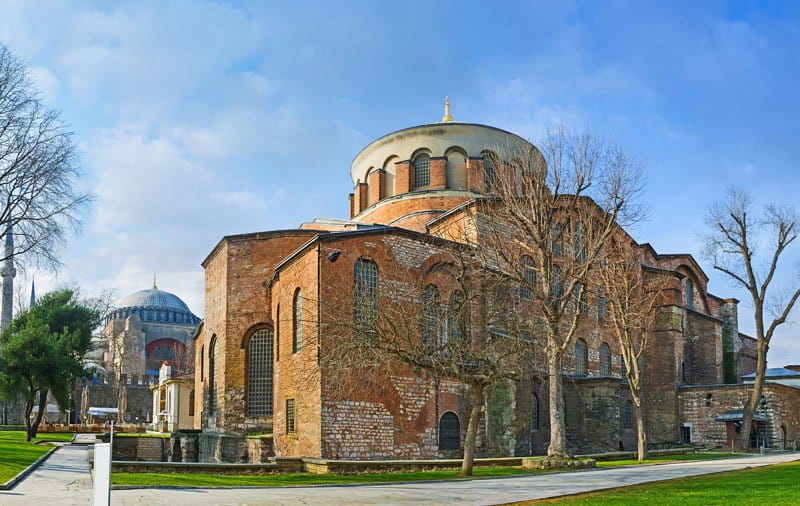 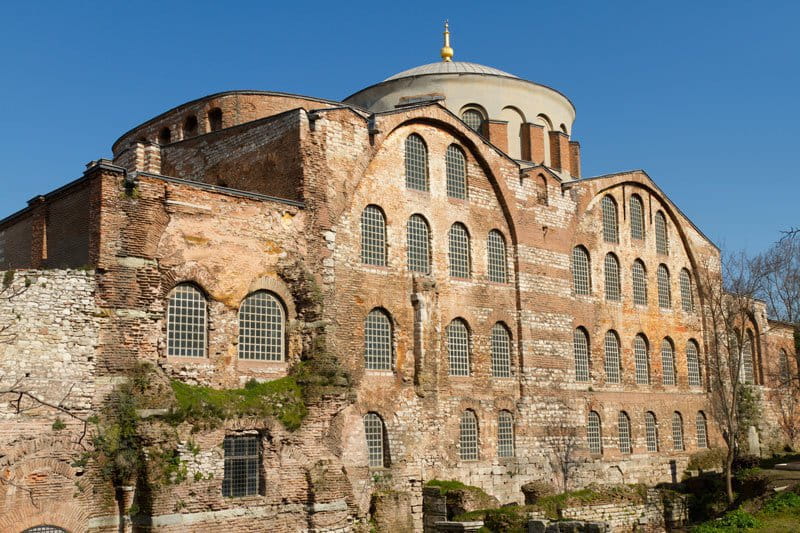 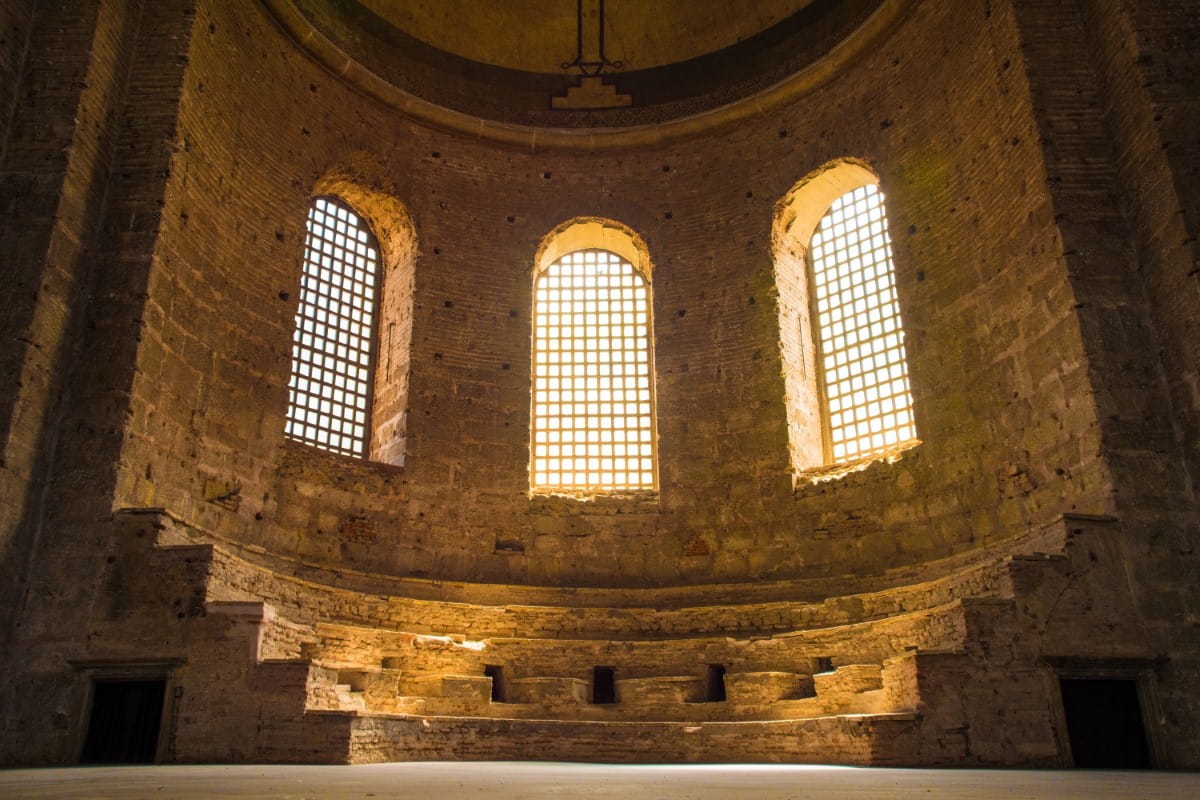 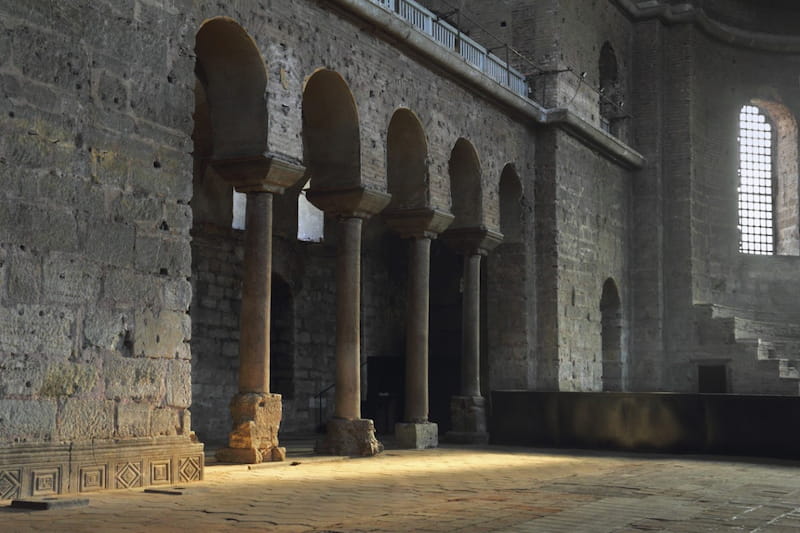 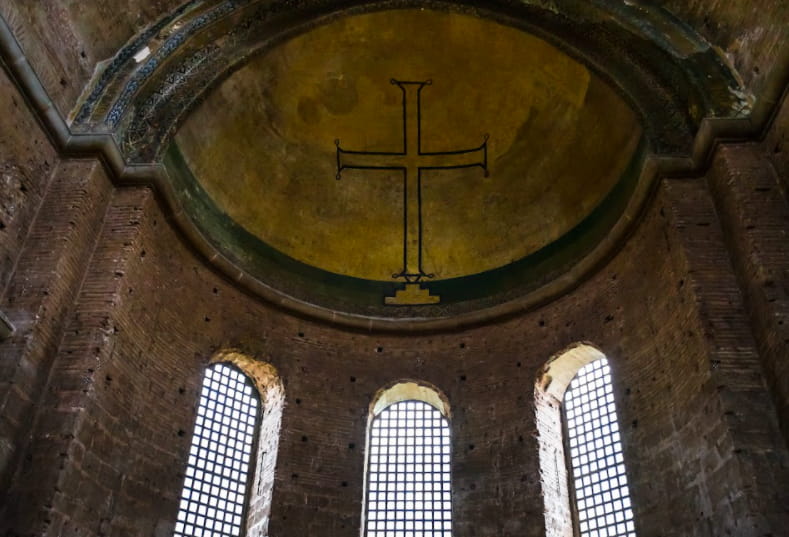 Why Should I Visit Hagia Irene Museum?

Hagia Irene building almost old as Istanbul. It will impress you with its historical monuments and architectural aspects. Seeing and learning about the impressive Roman and Ottoman synthesis in this architectural structure is an experience not to missed.

Can I Get in Hagia Irene Museum with Istanbul Tourist Pass?

Yes, you can visit Hagia Irene by joining the Topkapi Palace Tour and get the 5-minutes long highlight tour from our tour guides.

The Hagia Irene Museum is open for visits every weekday, except Tuesdays, between 09:00 am and 18:00 pm.