Have you visited Eyüp Sultan Mosque, one of the oldest mosques in Turkey?

Istanbul has a plethora of places to visit as a result of its rich history. The city has it all: museums, mosques, fortresses, you name it. The historical mosques are among the most popular tourist attractions, and our pick for today is the Eyup Sultan Mosque. It is a must-see if you are planning a cultural tour in Istanbul because it is the city's oldest and most important mosque.

The Eyup Sultan Mosque was built on the tomb of Abu Eyup el-Ensari, the Prophet's close friend. He fell ill and died outside the walls of Constantinople during the first Arab siege from 674 to 678, while carrying the banner of the Prophet's army. After the siege was over, he asked his friends to bury him deep within Constantinople. Though they were unable to breach deep into the walls, they did bury him by the Golden Horn in accordance with his request. "Tomb of Ebu Eyyub" was written in Sufi letters on the tomb.

Enjoy a tour with a local guide

See the great architecture of the Eyup Sultan Mosque

Learn why it has always been an important mosque

Feel the soul of the old city!

This is a part of half day tour which is operating every day with pick up from the hotel.

Thanks to its rich history, Istanbul has more than enough places for you to visit. Museums, mosques, fortresses, you name it, the city has it. One of the most popular places that attract tourists is the historical mosques, and our pick for today will be the Eyup Sultan Mosque. As it is the oldest and the most important mosque in Istanbul, it is a must-go if you are planning a cultural tour in Istanbul.

Eyup Sultan Mosque was built on the tomb of Abu Eyup el-Ensari, who was a close friend of the Prophet. During the first Arab siege of Constantinople from 674 to 678, he fell ill and died outside the walls while bearing the banner of the Prophet’s army. He asked his friends to bury him deep inside Constantinople after the siege was over. Though they failed to breach deep into the walls, they did bury him by the Golden Horn and honored his request. After Mehmet the Conqueror took Istanbul in 1453, he asked his spiritual advisor – the Shaykh al-Islam – Akshemsuddin to find the location of Eyup el-Ensari’s burial place. After looking for the tomb for a week, one-day Akshemsuddin passed out and saw a dream. Upon waking up, he claimed that the tomb was on the spot where he would lay the carpet for prayer. They found the tomb after some digging on the spot he stated. On the tomb, it said “Tomb of Ebu Eyyub” in Sufi letters.

This is a part of half day tour which is operating every day with pick up from the hotel.

Tour operates everyday, starts in the morning with pick-up around 08:15AM -08:45AM

After collecting the tourists from different hotels, the shuttle will be in the central meeting point of all shuttles. From there, the vehicle will be changed and tour starts around 9:45 AM

There is a half tour included visit to Eyup Sultan mosque. There is pickup from hotel. Drop off will be in Sultanahmet area.

Also this tour is combined with Miniaturk and Pierre Loti. 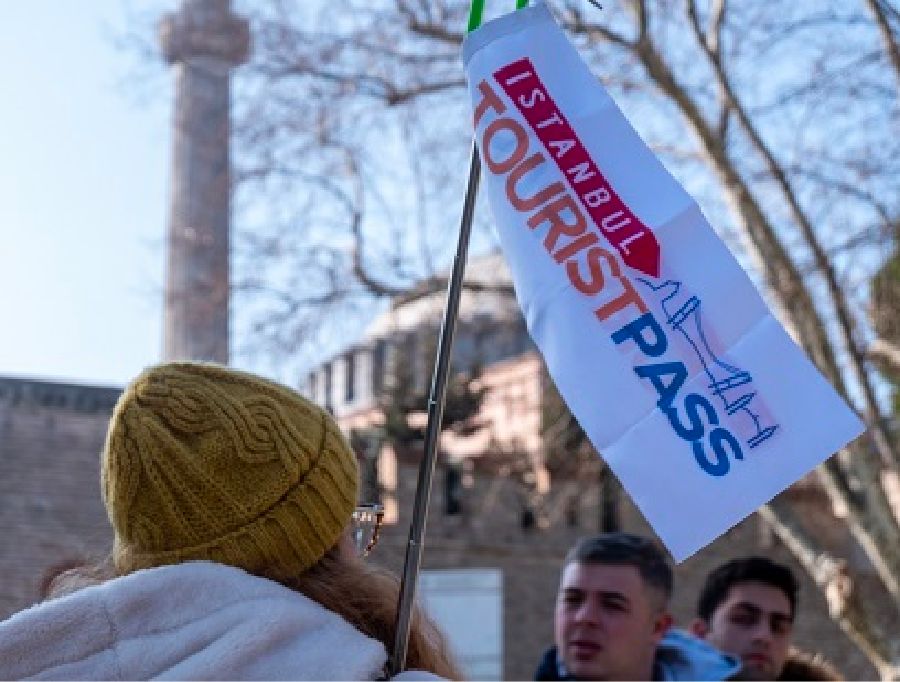 This is a Half-Day tour combined with Miniaturk And Pierre Loti.

Pickup is available only from hotels in Sultanahmet, Eminönü, Sirkeci, Laleli, Beyoğlu, Beşiktaş and Şişli areas.

Since there are other passengers in the group Pick-Up proccess could be take 1 hour or more depending on hotels location.

This tour needs reservation in advance.

Drop off is in Sultanahmet, not in your hotel.

Drinks and Meals are not included

Following the grave’s discovery, Eyup Sultan Mosque Istanbul was built on the location in 1458. However, even though it was repaired multiple times, it started to decay and was substantially damaged during the big earthquake in 1766. It stayed in a ruinous state for a couple of decades, but in 1798, III. Selim ordered its restoration. The mosque’s construction ended in 1800 and the Eyup Sultan Mosque we know today was created in Baroque style. It got repaired again in 1823 when its minaret on the sea side was damaged from lightning bolts. The mosque got its last repair during Adnan Menderes’ presidency.

During the reign of the Ottoman Empire, many sultans used to come to Eyup Sultan Mosque and pray before big battles. It was also where the coronation ceremony took place for centuries, where new sultans were girded with the sword of Osman.

Inside the Eyup Sultan Mosque

The mosque was built by the famous Ottoman architect Mimar Sinan. Its gorgeous architecture is the proof of Mimar Sinan’s talent. The sense of scale when you enter the mosque is immense. The dome measures 17.5 meters in diameter and has 2 half domes. The honey-colored bricks that’s used in most of the mosque, plush carpets and beautiful low-hanging crystal chandeliers are also very attractive.

The Sinan Pasha Pavilion in front of the main door was taken down in 1798 while the mosque was being rebuilt. On its place, there is a set that is surrounded by bars, and the set is under the shadow of the famous grand Eyup Sultan Mosque tree. Since Sultan III. Selim was a Mevlevi, there are Mevlevi head scarves over the bars, on the 4 corners of which are 4 fountains.

Ebu Eyup el-Ensari’s mausoleum is just next to the mosque too, adding to the religious importance of the place. It would not be a stretch to say that this mausoleum almost attracts more attention than the mosque itself. The wall of the mausoleum facing the mosque is covered by various Iznik tiles. Another famous religious relic that draws Muslims from across the world is the Prophet Muhammed’s footprint.

There is also the Eyup Cemetery near the mosque. Since being buried near the Eyup Sultan Mosque is seen as a big honor, there are the graves of many important people here. Among the Eyup Sultan Mosque burials are grand viziers, court officials, military men, poets and intellectuals, such as Adile Sultan, Ferhad Pasha, Sokollu Mehmed Pasha and Lala Mustafa Pasha. After Mecca, Medina and Jerusalem, this mosque is the 4th most sacred place for Muslims.

Eyup Sultan Mosque & square has a very mesmerizing atmosphere, especially during your first visit. It is very clear how this place has been attracting people from different religions and cultures for centuries. People praying in harmony, the gorgeous architecture, packs of cats and pigeons, the adhan in the background, many different mausoleums and religious relics all come together to create a feeling of holiness, and it is even more apparent during the Ramadan month.

You can visit the many small shops around the Eyup at the end of your trip to buy small Islamic gifts and wares like Qurans and prayer beads if you want to remember this mystic trip all your life. 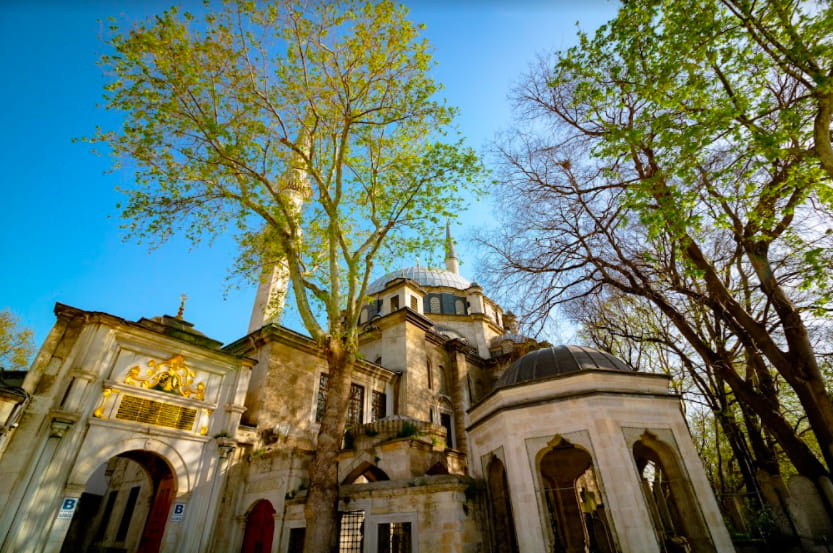 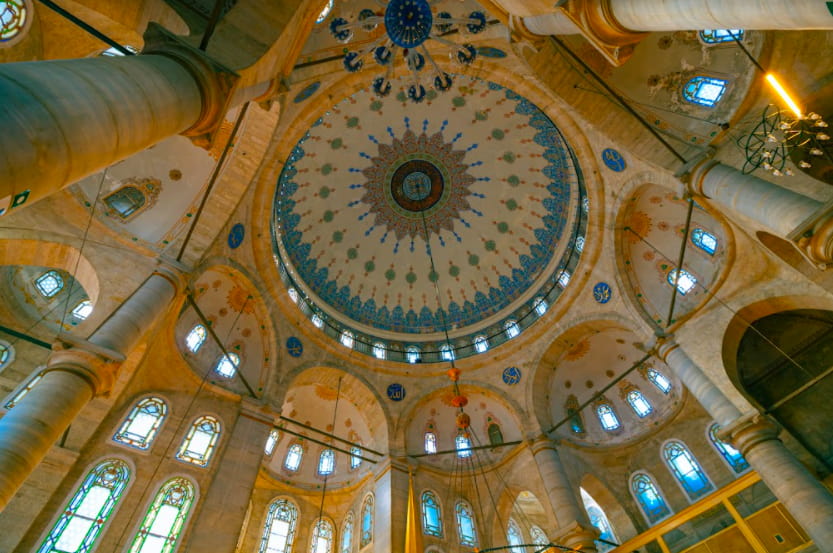 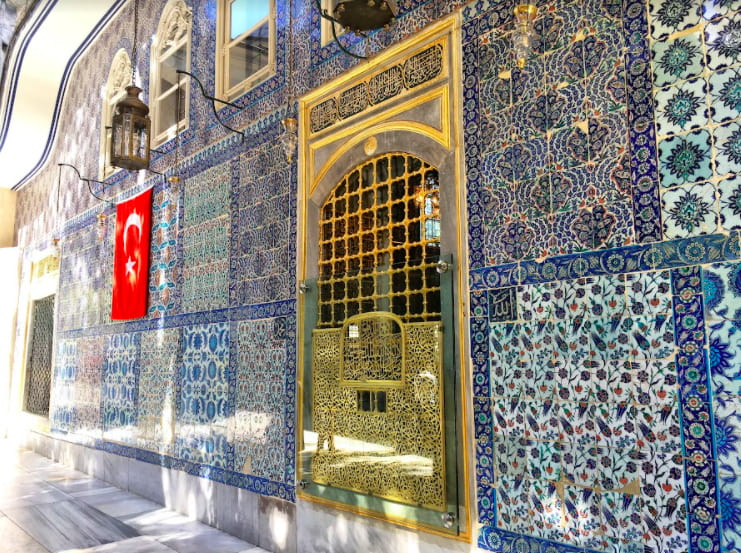 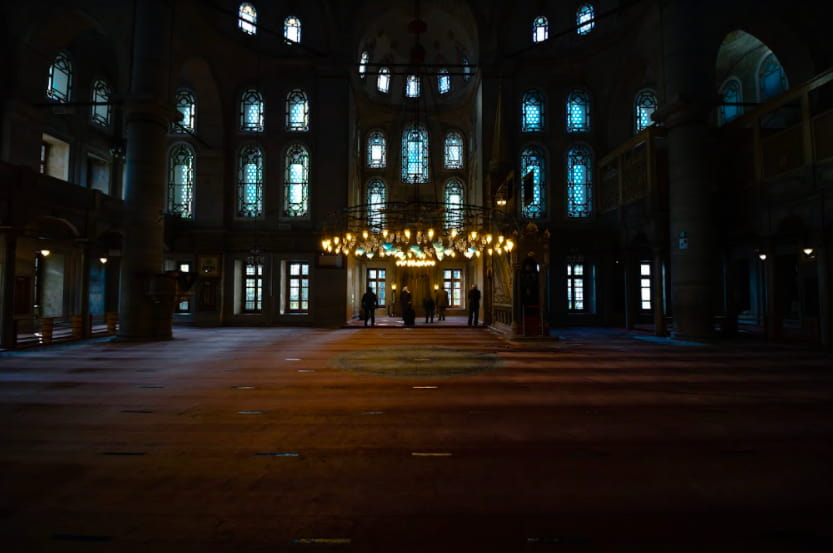 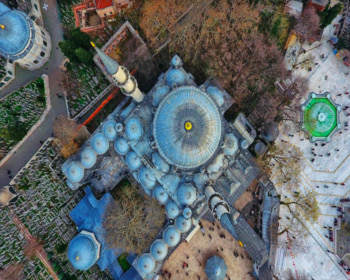 Is It Compulsory to Wear a Turban at the Entrance of Eyup Sultan Mosque?

No, but it is pretty common for female visitors to hide their hair as recommended in Islam. Therefore, you should have a turban or a scarf with you.

Is It Obligatory to Take Off Shoes at Mosque Entrances?

Yes! Remember that this is also a place of worship, so you must take off your shoes at the entrance to keep the venue clean.

Are Mosque Entrances Paid? Do I have to Pay an Extra Entrance Fee?

No, all mosques are free to enter! All members of the Istanbul Tourist Pass can attend contracted museums and excursions free of charge. If you want to have an economical and smart travel experience, choose the Tourist Pass!

Is The Call to Prayer Still Being Announced From the Eyup Sultan Mosque?

Yes! You can hear ezan from the mosque five times a day. You don't want to miss this magical experience!

Who Are the Architects of Eyup Sultan Mosque?

Eyup Sultan Mosque stands out compared to other mosques with its two different architects. These architects were Mimar Sinan, and one of the most famous architects of that period named Uzun Hüseyin Efendi.