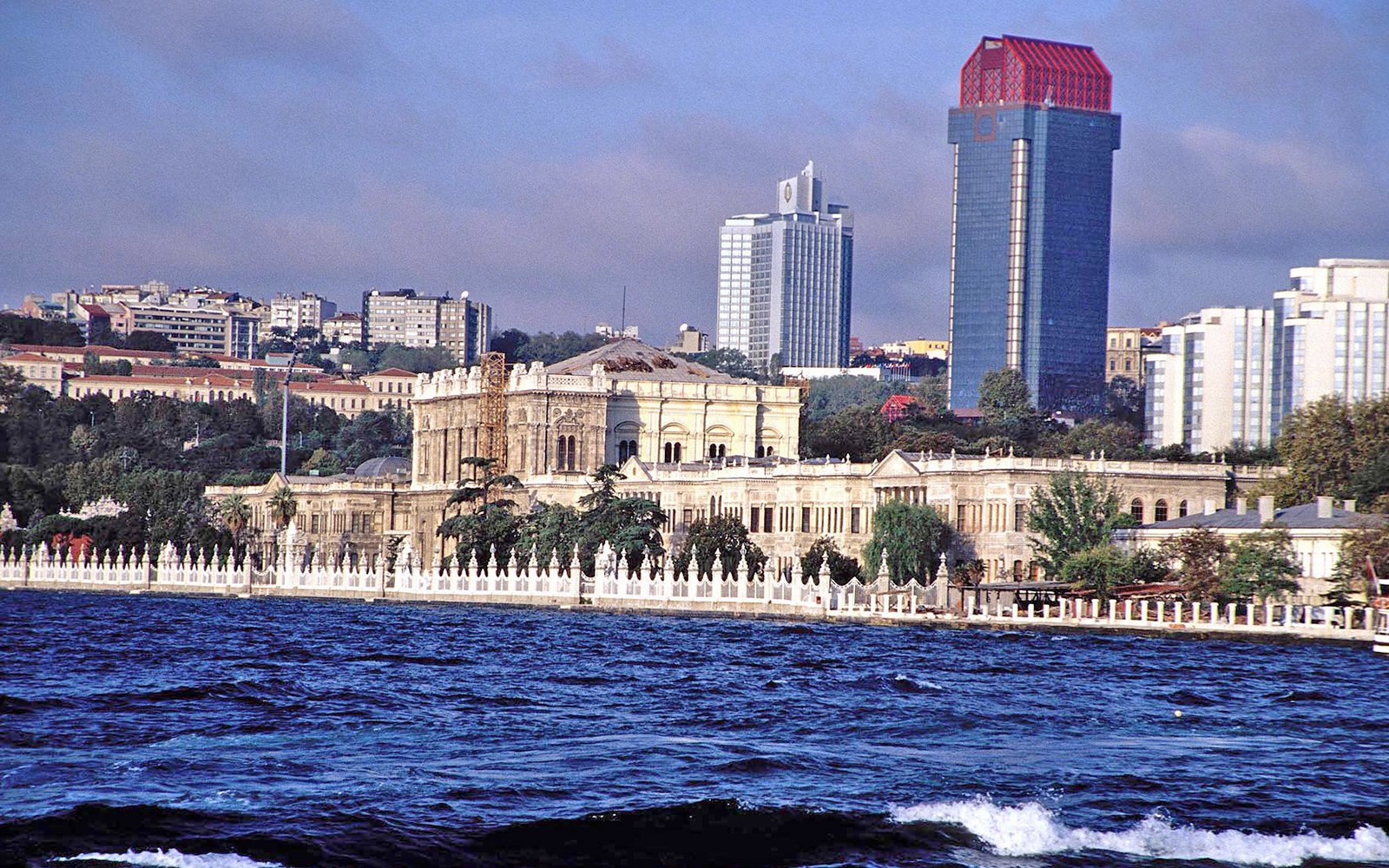 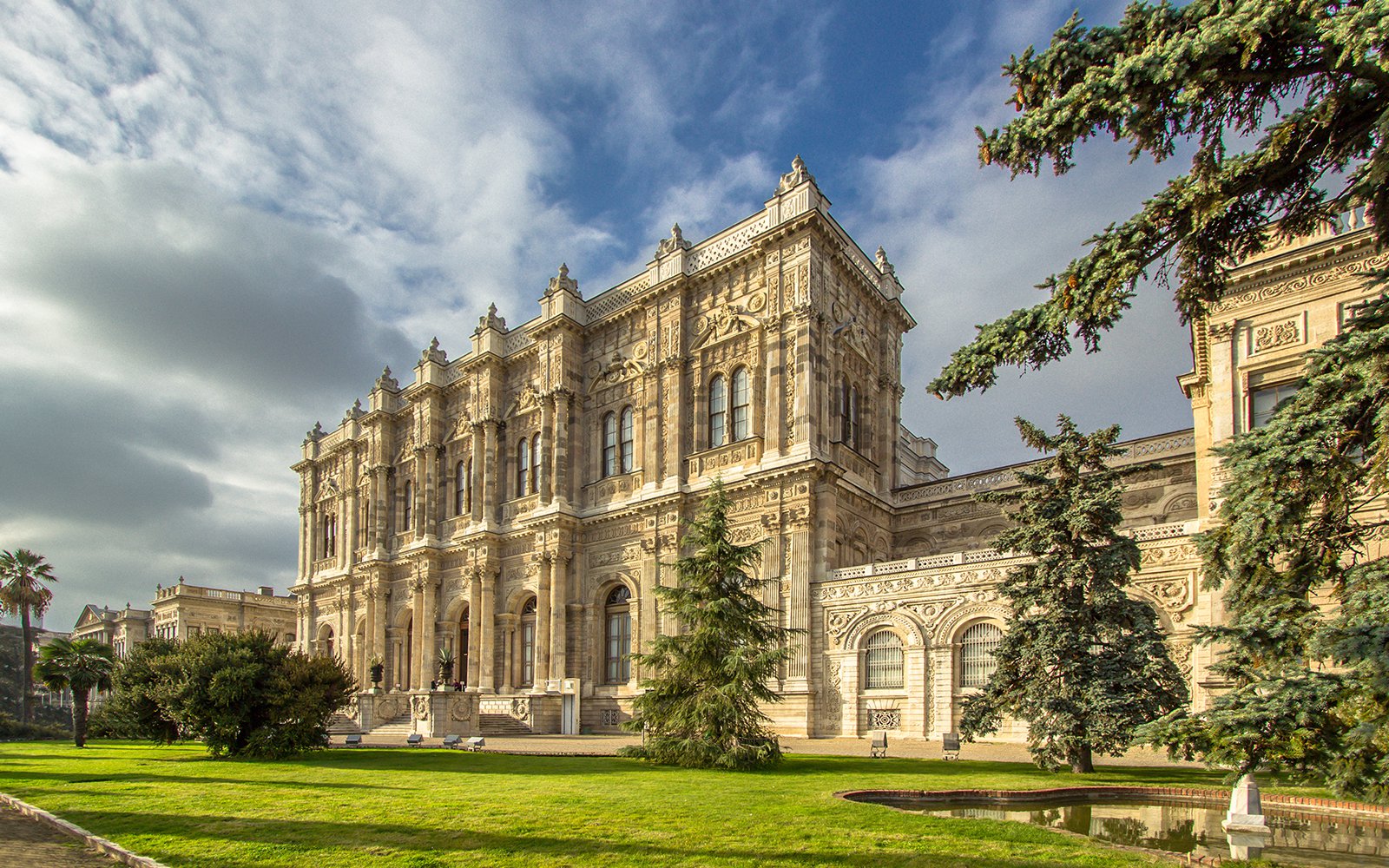 The grand Dolmabahçe Palace was the last and likely most expensive residence of the Sultans of the Ottoman Empire. It has 285 rooms, 44 halls, 68 toilets and six hammams (Turkish baths) and is set along the beautiful waters of the Bosphorus. There are many beautiful furnishings, artworks and other priceless treasures on display but one of the most spectacular is the 4.5 tonne crystal chandelier hanging in the Grand Ceremonial Hall. It's the largest chandelier in the world!

You will notice that Dolmabahçe Palace has a more European style than Topkapı Palace. In the 19th century, Sultan Abdül Mecit hired Armenian architects, a French decorator and European artists to build a modern Palace like those of other European Monarchies. The result is the unique mix of traditional Ottoman and Western European styles you see today.

When the Ottoman Empire came to an end and the Turkish Republic was formed, the Palace was used as a State Residence for visiting dignitaries. Later, it became the Presidential Residence of Atatürk in Istanbul.

Today, Dolmabahçe Palace has been completely restored and is a very popular museum. Join our guided tours to find out more interesting facts and see it for yourself!

Please show your Istanbul Tourist Pass ID to your guide at meeting point. You cannot enter the museum without guide.

The approximate duration is 60 minutes

Go through the security check and meet your guide at the clock tower in front of Dolmabahçe Palace.

Dolmabahçe Palace is very close to Kabataş tram station. Take the T1 tram to Kabataş or the funicular from Taksim metro station and get off at Kabataş station. From there, look around for the gas station. Cross the road in that direction and continue past the gas station for about 5 minutes.

Istanbul's one & only sightseeing pass with free Access to 50+ attractions & services.

Who lived in Dolmabahce Palace?

Abdülmecit was the first to live in Dolmabahce Palace and also carried out his official work here. After Abdulmecit, his brother Abdülaziz lived in this palace. One of the reasons why Dolmabahce Palace is important for the Turkish nation is that Mustafa Kemal Ataturk died here. It was also used as Ataturk's presidential residence in Istanbul. The buildings you will see inside Dolmabahce Palace are the Harem, Mabeyn, Clock Tower and Dolmabahce Mosque. The palace has 285 rooms and 46 lounges, 6 baths and 68 toilets, and the palace is built on an area of ​​110 thousand square meters.

Dolmabahce Palace architecture enchants everyone who sees it. It can make you feel as if you lived in the past with its different sections and many rooms. One of the places you should see when you come to Dolmabahce Palace is Dolmabahce Clock Museum. In 2004, a museum with the National Palaces Clock Collection was opened in the building, specifically in the Harem garden. Dolmabahce Clock Museum is the only clock museum in Turkey. Besides Ottoman works, you can also see European works. The collection of 71 different clocks of 18th and 19th-century works attracts attention. Dolmabahce Palace Painting Museum, in the heir apartment, has pictures showing the stages of the Ottoman Empire. There are portraits of Sultan Abdulmecid and Sultan Abdulaziz at the entrance. It is possible to see the paintings of different civilizations, such as works from the Goupil Art Gallery in Paris, as well as works that symbolize westernization in the Ottoman Empire, as well as paintings from Istanbul. If you prefer tours to see these museums, look at things to do in Dolmabahce Palace prepared by istanbultouristpass.com.

How to visit Dolmabahce Palace?

If you are looking for different and unique museums, we can recommend two places: Madame Tussauds Istanbul and Miniaturk. At Madame Tussauds, you can see famous people but with a twist: They are made of wax! MiniaTurk is an interesting place, too. You can have a trip to interesting places and iconic locations all over Turkey but their size is tiny.