Are you ready for a mysterious adventure?

See enormous snakes, spiders, frogs, turtles, alligators, and sharks, as well as tropical birds, in the mysterious Jungle world. In Turkey, these are quite rare! Nearly 400 creatures representing 100 different species live in the park, some of which are endangered. Don't miss out on your opportunity to view them for yourself!

When you arrive, ask for a Jungle Istanbul adventure map at the ticket counter and follow the path and suggestions to become the hero of the adventure and win a prize! All of this is free with the Istanbul Tourist Pass, so you may joyfully enjoy the exotic creatures of the rainforest with your loved ones.

Instant confirmation -  No reservation is required.

These are extremely rare in Turkey!

Be amazed by its The Park has almost 400 animals in total from 100 different species!

Be the hero of the adventure, and get a prize!

Enter the mysterious Jungle world and see everything from giant snakes, spiders, frogs, turtles, alligators, and sharks to tropical birds. These are rarely seen in Turkey! The park has almost 400 animals in total from 100 different species and some are even on the verge of extinction. Don't miss the opportunity to see them for yourself!

Are you ready for a mysterious adventure?

You can ask for a Jungle Istanbul adventure map at the ticket office when you enter and follow the route and tips, be the hero of the adventure, and get a prize

Get off at the Cumhuriyet Ortaokulu stop.
The park is located at the ground level of the Isfanbul Shopping Mall, right next to the Migros Store. Get Directions

No reservation is required. Just go to the location and present your digital Pass.

If you are looking for an adventure in Istanbul, look no further than the Jungle Park. Covering a 5,000 m2 area, this park has more than 400 animals belonging to 100 different species, some of which are on the verge of extinction. Not only that but there are regular training about nature and parks, birthday parties, a gift shop, and more waiting for you and your kids in Istanbul Tema Park Jungle.

What makes Jungle Park fun and exciting is the animals you get to discover during your trip. There are more than 400 animals belonging to 100 different species, some of which are on the verge of extinction. Jungle Istanbul stays in contact with domestic and foreign institutions to find out what they can do to protect and save the future of these species.

The arthropods in Jungle Park are among the favorites of visitors. These species, which include creatures like scorpions and spiders, have many examples inside Jungle Park. One of the popular spiders is the Theraphosa Blondi, also known as the “Goliath Bird Eater”. It normally lives in the South America has longer feet than other spiders. This giant spider weighs 170 grams on average. It is usually fed to mice or lizards. Its poisonous teeth are its deadliest weapons, not its webs.

Another stand out from the arthropods section is the Pandinus Imperator, which is the second longest scorpion in the world. Their natural habitat is Africa and they have an average life span of 8 years. They live in the nests they dig. They mainly eat termites in their natural environment, so although they are poisonous and strong, they are not that aggressive.

Arowana fish is among the most stunning fish species in the Jungle Park. These freshwater fish have lived since the age of dinosaurs and their natural habitats are the rivers in Asia. They are very aggressive fish. They are large as they can go up to 150 cm in length. They are also known as Dragon Fish and considered to bring luck and prosperity to the keeper, if they can keep the fish healthy and happy.

There are also many reptiles in Jungle Park. One of the reptiles that gets the most attention is the Mata Mata turtle. They are among the most odd-looking animals in the entire world with big, long heads that resembles a leaf. They are extremely slow and are carnivores that prefer live fish.
Another reptile that stands out is the Panther Chameleon. They live in tropical forests around the island of Madagascar and are one of the most colorful chameleons in the world. The male ones are richer in color to attract females. They often stay in trees and branches.

Desert monitors, also known as Varanus griseus, are also in Jungle Park. They are big lizards that can grow up to 2 meters in length. They live in Central Asia, North Africa, Egypt and our country. They change skin periodically like other lizards and they are great swimmers. They have a life span around 17 years. They feed on mice, eggs, or fish. Another interesting fact is that they cannot move their bodies at temperatures below 21 degrees.

Where is Jungle Park Istanbul?

Jungle Park Istanbul is located inside the Vİaland Shopping Mall, which is in the Eyup district of Istanbul. While taking the metro directly to the mall is not possible, you can use IETT like 39, 39Y, 39D, 39O, 47, 47L, 47E, 47T, 49A, 49G, 49Y and 49T to go to the Vialand Shopping Mall. If you can catch them, there are also free customer buses of the mall that take off from Alibeykoy and Kucukkoy.

From the Anatolian side of Istanbul, you can get on the Marmaray and transfer to the 39 or 39D buses from the Yenikapi station. Alternatively, you can take the ferries to Eminonu from Kadikoy or Uskudar and get on the 47 or 47E to reach the Jungle Park Safari Istanbul.

Jungle Park Istanbul opening hours are between 11.30 AM and 8 PM on weekdays, and between 10 AM and 9 PM on the weekends. It is FREE with Istanbul Tourist Pass.

After the visiting the Jungle park, don’t forget to visit the Sapphire Observation Deck in the Sapphire Shopping Center. It is located at the top of the mall, which is one of the tallest buildings in Istanbul. You get to watch Istanbul from 236 meters high, accompanied by the great dishes of the Vista Café & Restaurant. You also have the chance to take pictures with Showtime Pictures.

While you are in the Sapphire Shopping Mall, don’t forget to try out the Skyride 4D Simulation, which is just in the 54th floor. It lets you tour the Istanbul and some of its most famous monuments from a virtual helicopter with 4D effects.

Dialogue in the Dark is another unique experience near Jungle Park. This social project was presented in more than 40 countries across the globe, and it finally came to Turkey. It is described as one of the most exciting life-changing experiences, where you will be guided by blind guides in dark rooms to empathize with blind people.LEGOLAND Discovery Center is yet another amazing place for spending time with your kids. From the LEGO Factory Tour to the Kingdom Quest, this place is full of joy, especially for your children.

Sea Life Istanbul is just near the LEGOLAND Discovery Center and is a great place to visit with your family. There, you will see hundreds of different sea creatures in large aquariums that cover entire walls and areas

Want to visit all of the attractions above, explore Istanbul and save time & money at the same time? Buy an Istanbul Tourist Pass and get access to 85+ attractions and services in Istanbul. 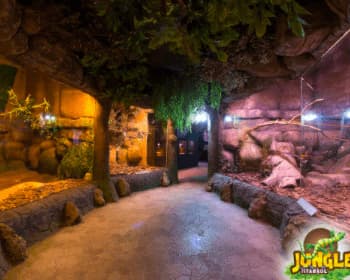 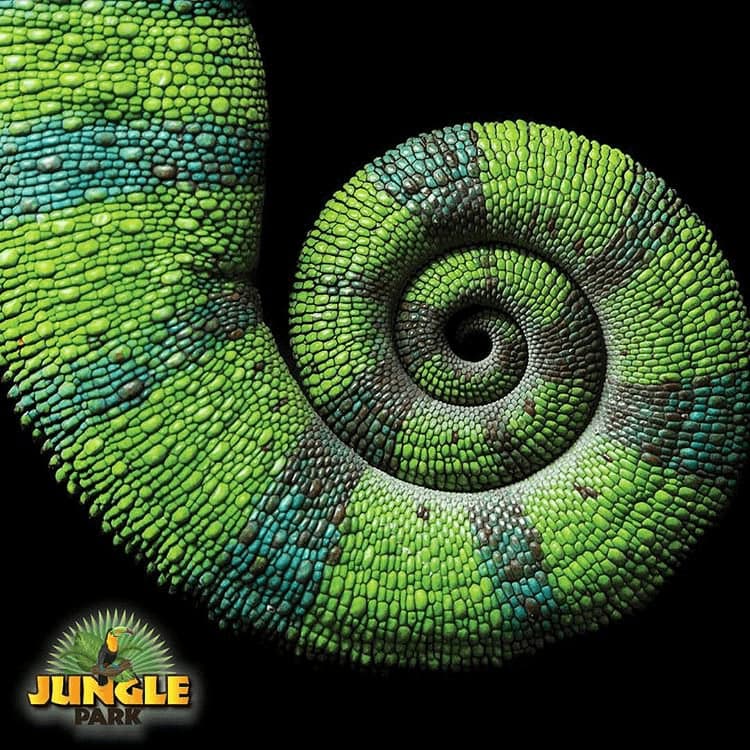 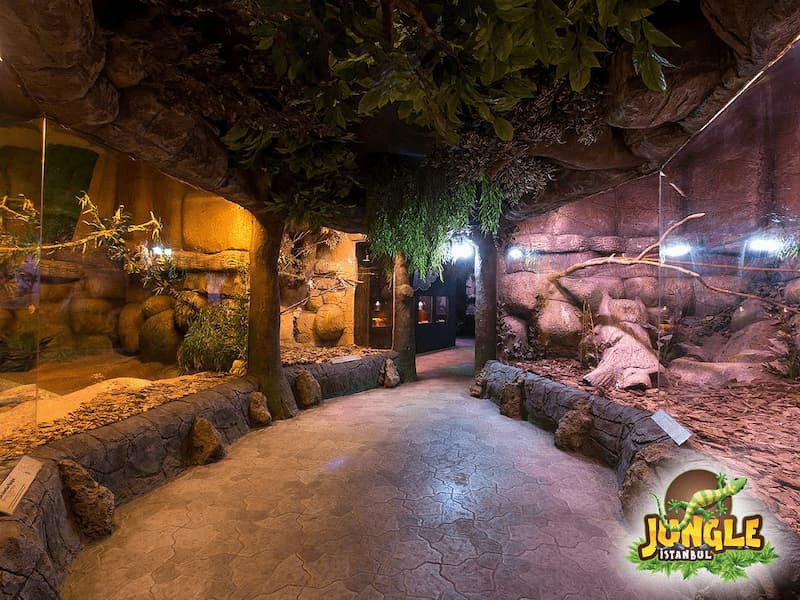 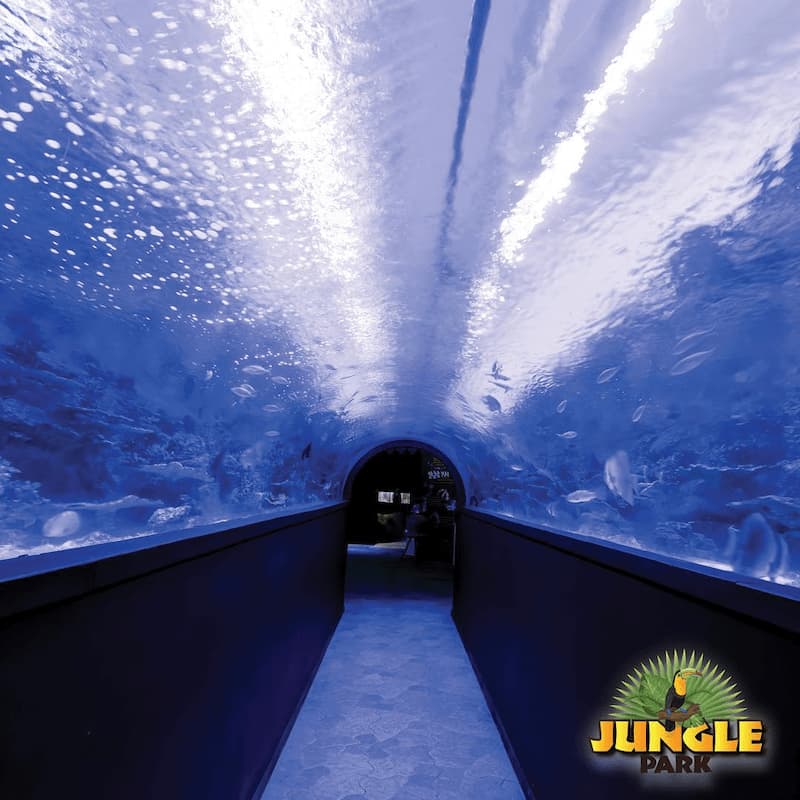 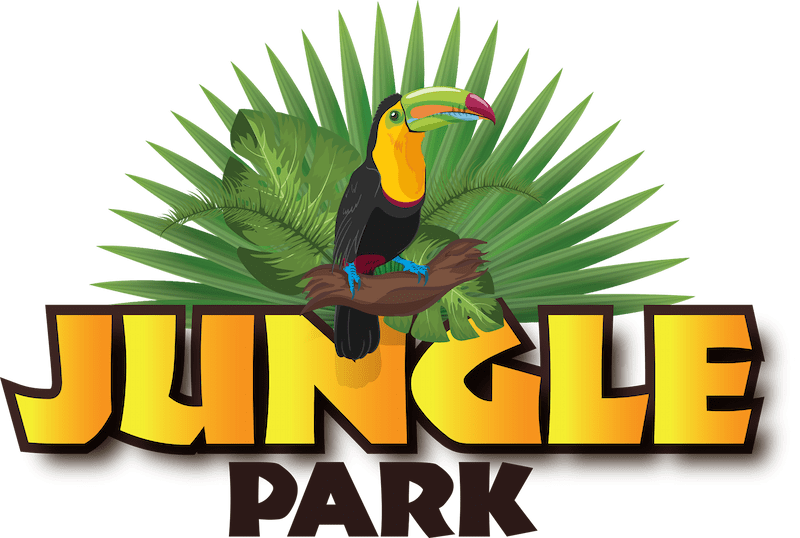 Why Should I Visit Jungle Park Istanbul?

At Jungle Park Istanbul, you can spot many creatures that you cannot see in the city and enjoy a lovely day with your family. You wouldn’t want to forget to take your camera because these beauties deserve to be kept as visual memories.

How Much Should I Pay for Tickets to Enter Jungle Park Istanbul?

There is no need to pay the entrance fee with Istanbul Tourist Pass. Just use your digital pass while entering the park and enjoy your visit!

What is included in Jungle Park?

In Jungle Park, you will find more than 1000 animals with 400 different species!

How Can I Go To Junge Park Istanbul?

You can go there by buses from Yeşilpınar. Drop off at Cumhuriyet Ortaokulu stop and go to Isfanbul Shopping Mall.