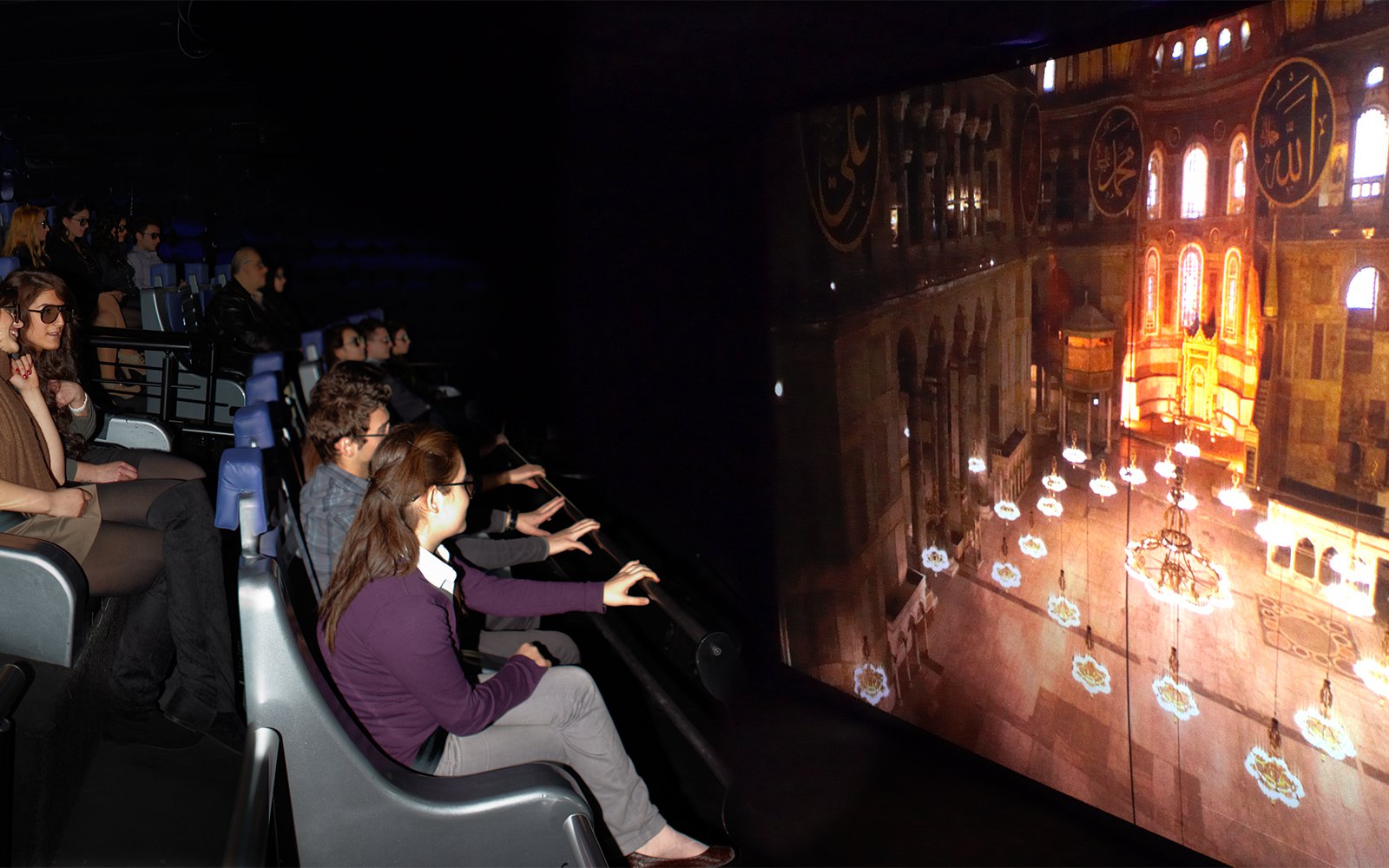 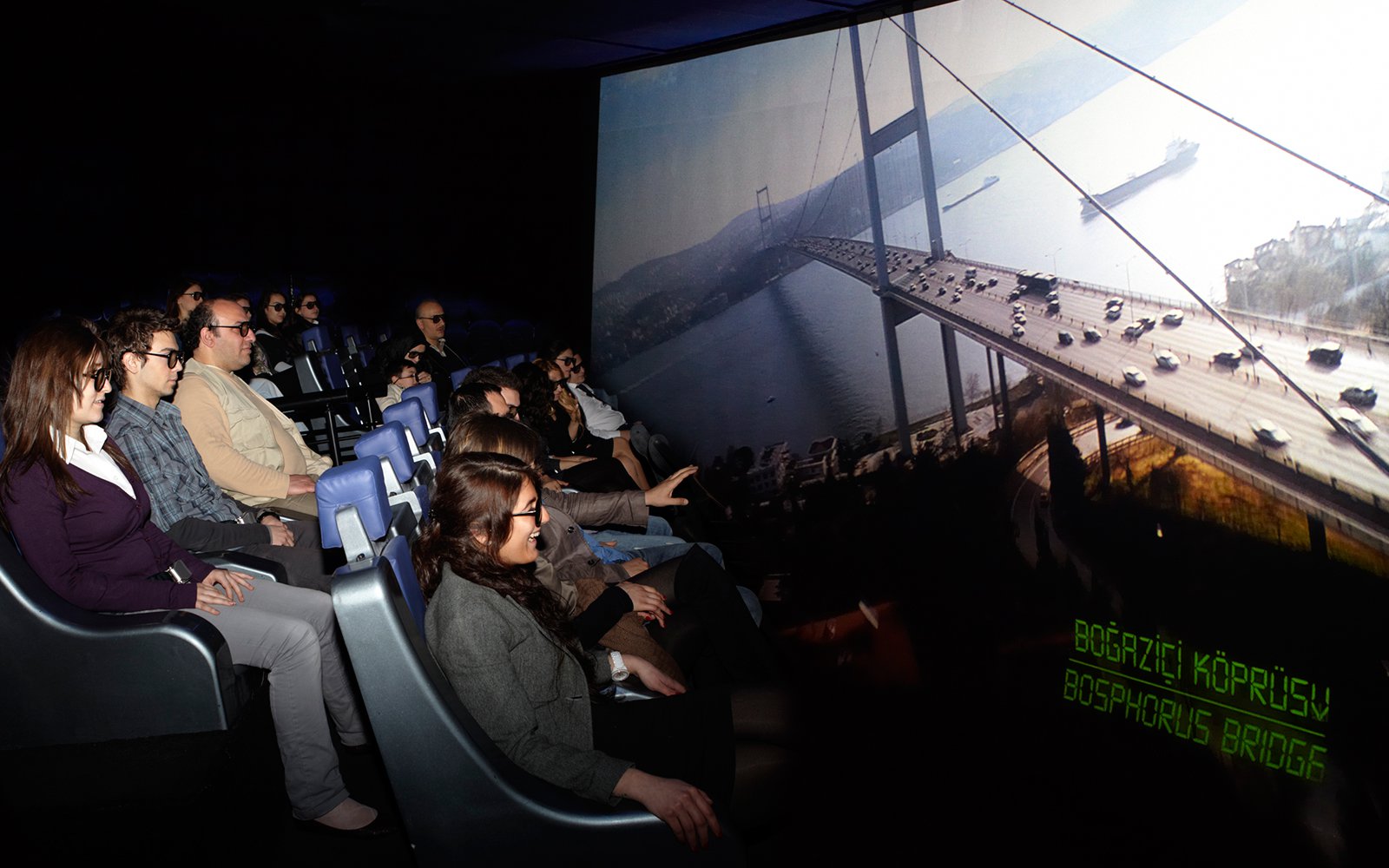 Experience Istanbul in 4 dimensions with the SkyRide 4D Simulation and enjoy a simulated helicopter ride over Istanbul's top landmarks!

Could there be a better way to see Istanbul?! In the "helicopter" you'll fly over the city, taking off from the terrace of the Sapphire Observation Deck to see the Bosphorus Strait, Maiden’s Tower, Hagia Sophia, Topkapı Palace, Basilica Cistern, Taksim Square and more.

The SkyRide Simulator is located at the top floor of the Sapphire Shopping Mall, in the observation deck. The mall can be reached via the metro, getting off at the 4.Levent station.

What’s a better way of visiting Istanbul than with a helicopter? Well, the good news is, you don’t have to actually hire a helicopter for that. The Skyride 4D Simulation in the Sapphire Shopping Center Istanbul will take off from the Sapphire Observation Deck and fly you over places such as the Bosphorus Strait, the Maiden’s Tower, Hagia Sophia, the Topkapi Palace, the Basilica Cistern, Taksim Square and more.

The Skyride 4D Simulation view lets you see some of the most symbolic places of Istanbul from above, as well as giving you a tour inside some of them. It gives the visitors a chance to approach to what is seen from the Observation Terrace with a simulated helicopter. The helicopter departs from the Observation Terrace and tours around the Bosphorus, Maiden's Tower, Hagia Sophia, Topkapi Palace, Basilica Cistern, and Whirling Dervishes.

Bosphorus: One of the most famous attractions of Istanbul is the Bosphorus Strait. Running through the center of the city, this natural strait divides Istanbul into two continents and has 3 bridges that connect the both sides of Istanbul: 15 Temmuz Sehitler Bridge, Fatih Sultan Mehmet Bridge and Yavuz Sultan Selim Bridge. This strait also serves as a connection point between the Marmara Sea and the Black Sea. Its width varies from half a kilometer to 3 kilometers. Because of the beautiful sights near the shores of Bosphorus, a lot of wealthy people in the Ottoman Empire built their homes, mansions and pavilions on the shores, most of which you can still see today. If you want to experience this unique and beautiful strait yourself, you can book a Bosphorus cruise and watch all of the wonderful views running along the Bosphorus in person.

Maiden’s Tower: Maiden’s Tower, also known as the “Kız Kulesi” in Turkey, is another popular attraction that is loved by both tourists and the locals. Located near the coast of Uskudar, this tower has a long and complicated history. Thought to be originally built in 1110 by Byzantine Emperor Alexius Comnenus, it was destroyed, burned and rebuilt many times throughout history. The maiden’s tower that we know today was built during the reign of Mahmud II. It was used as a station for many purposes for years, but then was restored between the years of 1995 – 2000. Today, it serves both as a museum and a restaurant.

Hagia Sophia: If there is one monument that comes to the minds of people when you say “Istanbul”, it is Hagia Sophia. This large and one-of-a-kind building was built in AD 537, and has seen many different historical periods. Originally, it was a Greek Orthodox Christian patriarchal cathedral, but was converted into a mosque after Ottomans took Istanbul. It is seen as one of the most significant structures of the architectural history. Today, it is a museum that hosts many important historical and cultural works of art, including many mosaics, urns, columns and alike. But the main attraction inside is the interior design of the Hagia Sophia.

Topkapi Palace: Though not as old as Hagia Sophia, Topkapi Palace Museum is just as popular amongst tourists. This famous Ottoman palace’s construction was ordered by Fatih Sultan Mehmed after the conquest of Istanbul, in the year 1459. It saw many restorations and expansions over the centuries. After the proclamation of the republic in 1923, it was transformed into a museum by the new government. Today, it still is a museum that is administered by the Ministry of Culture and Tourism. Since the palace is very large, only its most important and interesting parts are open to the public.
Basilica Cistern: Also known as the “Yerebatan Cistern”, Basilica Cistern carries the title of being the largest ancient cistern in Istanbul. It is estimated that it was built in the 6th century by the Emperor Justinian I. It provided Istanbul water for many centuries, which has always been a city that had water problems. When you get inside, the sheer number of columns and the atmosphere may shock you. There are 336 marble columns inside, divided into 12 rows of 28. There are a couple of pillars that attract extra attention, such as the Hen’s Eye and the Medusa Head columns. It is estimated that the cistern’s total water capacity is 80,000 m3.

Whirling Dervishes: Whirling dervishes show of Turkey attracts hundreds of thousands of tourists each year, and for good reason. Their dance mesmerizes everyone that watches it, and the history and culture lying behind their Sufi Order holds a crucial place in the history of both Turkey and Islam. Their history dates back to the early 14th century, to the Turkish city of Konya. Formed by the followers of Mevlana Celaleddiin-i Rumi, Sufism is all about the inward search for God. Everything that the Whirling Dervishes do have a meaning behind them. Their black cardigans symbolize the tomb of a person. They come to the stage with these cardigans, and they take them off before they start. This reveals their white robes, which symbolizes the white burial robes that is used in Islamic funeral rites, also known as the “kefen”.
If you want to visit these amazing attractions in person, you can also consider getting an Istanbul Tourist Pass, which also includes 35+ attractions and services across all of Istanbul.