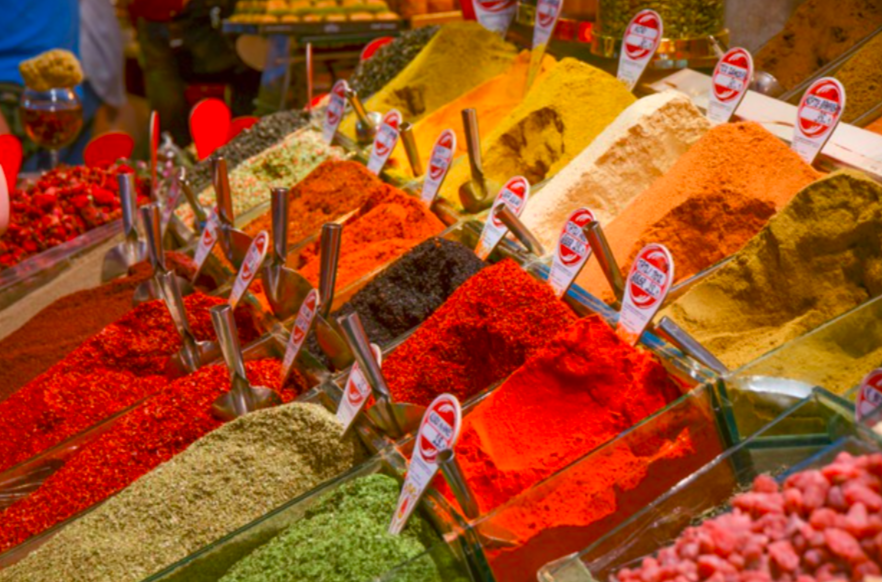 The historical Egyptian Bazaar is one of Istanbul's main bazaars that dates back to the Ottomans. The market served as the Ottoman Empire's foreign trading base. Today, it is a vibrant and traditional bazaar known for its herbalists and numerous interesting souvenirs, as well as the most well-known covered shopping complex after the Grand Bazaar. Are you curious to know more about the history of Spice Bazaar?

It was called Egyptian Bazaar since it was founded in 1660 with funds from the Ottoman district of Egypt. Istanbul's spice trade is focused on the bazaar. Spice Bazaar has 85 shops offering spices, Turkish delight, and other sweets, jewelry, souvenirs, dried fruits and nuts, and so on. A trip to Istanbul will be incomplete without a visit to the atmospheric Spice Bazaar. Visit the Egyptian Bazaar, which is more colorful and lively during Ramadan than normal. An Istanbul tour is never complete without a visit to the Istanbul Spice Bazaar!

What to Buy in Spice Bazaar?

The Spice Bazaar, which is another spot to buy authentic merchandise, is also known as the Egyptian Bazaar. Souvenirs such as porcelain cups and glasses are available.

Many different varieties of spices from Turkey and other Eastern countries are available here. Mystical aromas and wild aromas of different spices. The enticing aromas of cumin, mint, cinnamon and a plethora of other herbs and spices produce an incredible ambiance here. You will also include Turkish delight (Lokum) and scent, in addition to spices. When you visit Istanbul, make sure to visit this location to get a true sense of the old city's spirit!

Several records indicate that the bazaar's original name was "New Bazaar." It was given the name "Egyptian Bazaar" (Turkish: Mısır Çarşısı) since it was founded with funds from the Ottoman district of Egypt in 1660. This is why the name is often mistranslated as "Corn Bazaar," since Egypt means "corn" in Turkish. The bazaar was (and still is) the hub of Istanbul's spice trade, although, in recent years, other types of shops have increasingly replaced spice sellers.

The structure itself is part of the New Mosque complex. The proceeds from the leased shops within the bazaar building were used to maintain the mosque. It was designed by court architect Koca Kasim Aga, but construction began in the last months of 1660 under the supervision of another court architect, Mustafa Aga; following Istanbul's Great Fire of 1660, which began on 24 July 1660 and lasted slightly more than two days (circa 49 hours, according to Abdi Pasha's chronicles). Following the fire, a massive reconstruction and redevelopment campaign began in the area, including the resumption of the New Mosque's construction works in 1660 (the mosque's construction was eventually finished between 1660 and 1665) and the start of the Spice Bazaar's construction in the same year.

What is Istanbul Tourist Pass, and Is It Advantageous?

The Istanbul Tourist Pass is a digital pass that gives entry to more than 85 attractions in Istanbul, including the world-famous Hagia Sophia Mosque, the opulent Topkapi Palace, the legendary Basilica Cistern, and many more. The Istanbul Tourist Pass, on the other hand, is not limited to these attractions. It also provides a variety of fantastic programs, such as a lovely dinner on a Bosphorus cruise, or a getaway trip to Bursa. During the cruise, when enjoying some of the best foods in the world, you will be awestruck by the city's nightscape. All of these Istanbul attractions are included in the price of the Istanbul Tourist Pass.