Are you ready to see the Blue Mosque, one of the oldest mosques in the world?

Being one of the world’s oldest and most marvellous mosques, the Blue Mosque is sure to amaze you. Discover the heritage of a once-great Ottoman Empire and Istanbul’s spiritual side with this amazing structure. The Blue Mosque is easily the most recognizable landmark and a sight to behold to any visitor to Istanbul.

About The Guided Blue Mosque Tour (Under Restoration)

Discover the Blue Mosque with its 6 magnificent minarets and unique interior decoration!

Take a closer look at the unique work of Sedefkar Mehmet Aga, a student of Mimar Sinan, the most famous architect of the Ottoman Empire!

See the great architecture of the Blue Mosque

The Blue Mosque: an Icon of the Islamic Ottoman Empire

Be transported back in time by one of the oldest and most beautiful mosques in the world, the Blue Mosque. Experience the spiritual side of Istanbul and soak up the culture of the Islamic Ottoman Empire. The Blue Mosque is an iconic attraction of the city and is a must-see for every visitor to Istanbul. It is located in the heart of Sultanahmet, very close to many other attractions that are included in your Istanbul Tourist Pass, so start the morning there and spend the rest of the day exploring the best of Istanbul's Old City!

The tour starts at the main bus stop for BUSFORUS ISTANBUL at Sultanahmet Square. Look out for the red double-decker buses. It's about 20 metres (65 ft) in front of the Hagia Sophia Museum.

The tour starts at the main bus stop for BUSFORUS ISTANBUL at Sultanahmet Square. Click on Get Directions above to find the location.

When visiting mosques in Istanbul, remember to wear modest clothing (arms and legs covered) and women must cover their hair with a scarf. If you forget to bring your own scarf, you can borrow one from a small stand before you enter the Blue Mosque.

The mosque is closed to tourists every day during praying times.

All About Guided Blue Mosque Tour (Under Restoration)

Have you ever thought about turning the unique pages of Istanbul's history? Here is an Istanbul tale you should know. Once, there was a Sultan named Ahmed I, who was a devout man. Sultan Ahmed wanted to express his devotion to God, and he asked for a magnificent mosque that would be caught in the eye in every aspect of Istanbul. He dreamed about a mosque with a difference! So, the tale of the Blue Mosque of İstanbul has started.

The architect Sedefkar Mehmet Aga started to build this famous Blue Mosque in 1609 and completed the construction in 1616. He was one of the well-talented architects of the 17th-century Ottoman era and the pupil of the well-known architect Mimar Sinan. Sultan Ahmed’s wish for a mosque with glory, strength, and brilliance came true! The Blue Mosque has been at the center of Istanbul, surrounded by history, and visible from every corner of the city since then.

What is the thing that makes this famous mosque different from others? Being the first mosque of the Ottoman empire, which has six minarets, Blue Mosque became a peerless architecture of the 17th-century Ottoman empire and today’s Istanbul!

During the construction, the six minarets of the Blue Mosque started some controversy because it was the Kaaba, the holiest mosque of Mecca, having six minarets, and the Blue Mosque was considered to be challenging Kaaba. So, Sultan Ahmed sent constructors to Mecca to build the seventh minaret for Kaaba.

The “Blue” Mosque and Interior Design

The Blue Mosque (Sultanahmet Camii in Turkish) is called “blue” by Europeans since blue tiles surround its interior walls. Be ready to be dazzled when you step inside the Blue Mosque because the internal part is as charming as the exterior part! More than 20.000 handmade Iznik (Nicaea) ceramic tiles in the shape of 50 different tulip designs adorn the interior walls of the Blue Mosque; the paramount chandeliers lighting up the majestic building await you!

In the Blue Mosque, the regal red carpet covers all the space. Calligraphy with Qur’an verses will get your attention immediately. If you seek the best places to visit in Istanbul, the Blue Mosque offers you the most beautiful visual feast.

There are lots of exciting features that make this mosque so brilliant. Don’t worry about missing something out because your experienced Istanbul travel guide will be with you during your visit!

For many years, this majestic mosque has been welcoming and embracing anyone. The gates of the Blue Mosque are always open for prayers for those who would like to practice their religion.

With its all glory and magnificence, it stands at the city's heart; it draws all the attention of tourists and even locals! So it is one of the best places to visit in Istanbul. The mosque also welcomes travelers who desire to discover, and get familiar with Istanbul better by learning from its history! Get your Istanbul Tourist Pass today and discover the Blue Mosque now!

At The Heart of Istanbul: The Blue Mosque

It’s impossible to ignore the Blue Mosque even when you’re walking far away from it. Remember the tale that Istanbul has just told you! It can be said that it is one of the most realistic tales. We have proof: let’s say you are walking or sipping your Turkish coffee by the seaside of Karaköy: In one of the most popular places in Istanbul, the first gaze you may catch will be the Blue Mosque! You may even find your directions according to this famous mosque. It is a fact that when you say Istanbul, the Blue Mosque is the essential part reflecting the soul of this city.

It’s always said that Istanbul has a lot to offer and many things to discover. Have you ever looked at the best canvas painted by different nations, cultures, and religions? The very first and the best place to experience all of these is the Blue Mosque. One of the most significant Islamic architectures, the Blue Mosque stands at the top of Istanbul; gazing at the city just like a guardian that watches over Istanbul day and night!

Have you ever heard the rhythm of this city? Around the Blue Mosque, you may hear the songs of the pigeons and the sounds of prayer calls. You can come across people visiting here from all around the world. You are going to catch the panoramic view of Istanbul in the eye of the Blue Mosque!

The Blue Mosque is also close to other touristic attractions such as Hagia Sophia, Topkapı Palace, the Basilica Cistern, the Archeological Museums, and the Grand Bazaar. So, during your visit to the Blue Mosque, you come across other hidden treasures of the city which are only a few minutes on foot!

Did you know that the Byzantine structure to serve as a church, commissioned by Emperor Constantius in 360 A.D, the Hagia Sophia, and the 17th century’s Ottoman frame,  the Blue Mosque, are across from each other? They are literally 10 minutes apart on foot. It is a fantastic opportunity to see how the city preserves its history and embraces cultural differences! 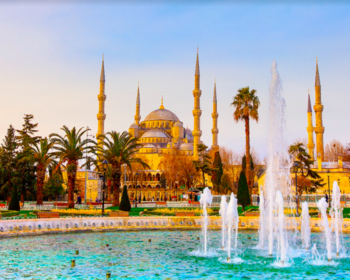 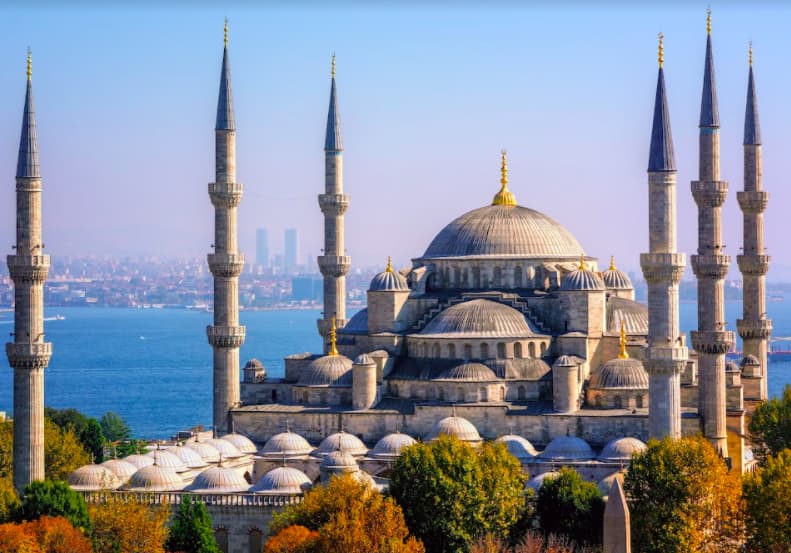 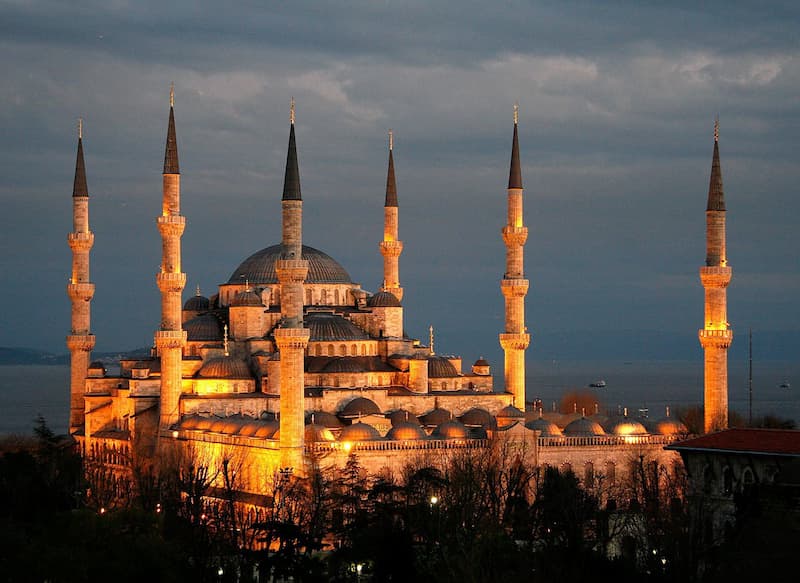 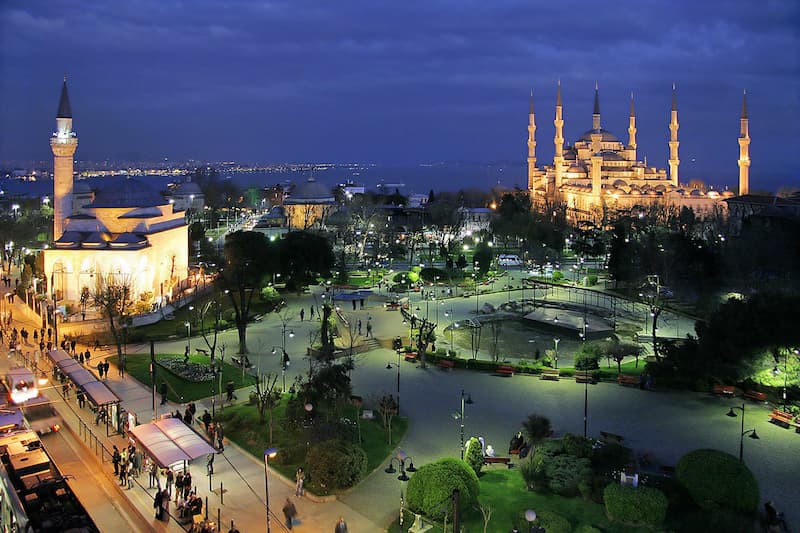 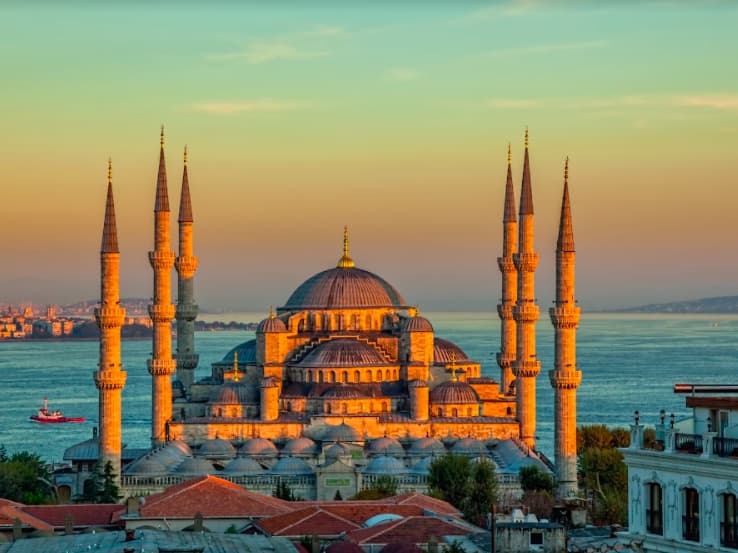 Why Should I Visit the Blue Mosque?

If you are a local visitor, it’s nearly impossible not to have heard about the impressive beauty of the Blue Mosque. Also you should experience being a part of the crowd of Turks and tourists gathering in the Blue Mosque’s park at sunset.

Can I Visit Blue Mosque Without a Guide?

Yes, you can get in without a guide except during the praying hours but we recommend to join Guided tour for learn more about the history.

When I Can Join the Blue Mosque Tour with a Guide?

Why is Blue Mosque so famous?

The Blue Mosque is distinguished not just by its six minarets, but also by its interior decorations and illumination.

Where is the Blue Mosque situated?

Blue Mosque is situated in Sultanahmet, close to other attractions like Hagia Sophia.

Can You Pray Inside the Blue Mosque?

Yes. However, the mosque is closed to visits during prayer times.

What Religion is the Blue Mosque?

Blue mosque belongs to the islamic religion since 90% of Turkey is from muslim population.