Here is an opportunity for you to visit the Sakıp Sabancı Museum in Istanbul!

The museum of Sakip Sabanci was established in 2002 and welcomed the public first at the Atli Kosk in Emirgan, one of Istanbul’s oldest residential areas on the Bosphorus. With a vast collection of paintings and calligraphic works, it is one of the biggest museums of Istanbul. All along the year, the museum hosts a variety of displays and galleries, which houses the works of many talented and original artists, important sculptors and painters.

About The Sakip Sabancı Museum Entrance

Explore the artifacts from the beginning of the Ottoman Empire, which contain the rare manuscripts of the Qur’an and the Sultan's edicts

Discover the Archeological and Stone Works Collection consists of Roman, Byzantine, and Ottoman pieces, and feel the old city's soul!

The Sakip Sabancı Museum is one of Istanbul's most renowned private fine art museums. It is located in the beautiful area of Emirgan with a lovely view of the Bosphorus.

At the Sakıp Sabancı Museum, you can view a unique collection of paintings that show the development of Turkish art from the Ottoman period through to the Turkish Republic. There are beautiful international works as well, but these Turkish examples of modernization in Turkish art are a very important cultural treasure.

The Museum you see today is actually the former summer house of the famous Sabancı family and is preserved exactly as it was when they lived there. This gives visitors a chance to see the beautiful furniture and decorative objects they collected at a time when society in Turkey was modernizing and westernizing in the 19th century. The Museum often hosts conferences, seminars, concerts, educational programs, and special art events. Highlights of past events include "Picasso in Istanbul'' and "Master Sculptor Rodin in Istanbul".

This is a lesser-known museum in Istanbul but is a real jewel. Take a cruise up the Bosphorus, hop off at Emirgan and give yourself lots of time to explore this beautiful space and soak up the rich artistic and cultural history you'll find there.

Sakıp Sabancı Museum Collection of the Arts of the Book and Calligraphy offers a comprehensive overview of 500 years of Ottoman calligraphy, with rare Koran manuscripts, kıtas, albums, panels, hilyes, edicts, and calligraphic tools. In 2012, the Collection was re-launched with a new design and a contemporary display allowing visitors to view augmented reality animations and take a detailed look at valuable and rare manuscripts, page by page via iPad.

SSM Painting Collection is a historic continuation of SSM’s The Arts of the Book and Calligraphy Collection. The collection bears witness to the transformation of Turkish image production and the evolution of the concepts of art and artist while embodying the clues of the modernization process starting from the Ottoman Empire and continuing with the Republic of Turkey.

The rooms on the ground floor of the Atlı Köşk display furniture influenced by baroque, rococo, neo-gothic, neo-classic, and empire styles and ornamental works from the 19th  century. The Archeological and Stone Works Collection consists of Roman, Byzantine, and Ottoman pieces and is exhibited in the Museum’s garden.

Monday: The museum is closed

You can get to the Sakip Sabancı Museum using all public buses going to Emirgan from Eminonu or Besiktas. Get off at the Emirgan stop, turn right and walk until you see the museum on your left-hand side.

No reservation is required. Just go to the museum and present your digital Pass

All About Sakip Sabancı Museum Entrance

Sakıp Sabancı Museum is a museum that was established in 2002 and opened to visitors at the Atlı Köşk, located in Emirgan, one of the oldest settlements on the Bosphorus in Istanbul. With its rich calligraphy and painting collection, it is among the largest museums in Istanbul. This museum, which houses the works of original artists and essential painters and sculptors, hosts various exhibitions and promotions throughout the year.

Sakıp Sabancı Museum, which has a large visitor mass with events held at various times of the year, belongs to the management of Sabancı University and it is open to visitors at any time of the year. This museum, which attracts local and foreign tourists all year round, brings art enthusiasts and painting lovers together with various activities

Among Istanbul's most visited tourist attractions, Sakıp Sabancı Museum hosts thousands of visitors a year despite its recent establishment. The museum has heavy visitor traffic not only in the summer but at all times of the year. The museum is among the critical places for people interested in arts and culture, and tourists who want to see the reflection of the past today should head there. Sakıp Sabancı Museum, which also frequently accepts school trips, tours, and individual visitors, has the feature of being an original art exhibit in the heart of the city.

Sakıp Sabancı Museum was designed by an Italian architect, Edouard De Nari, in 1927. The original owners of this mansion are the Khedive family of Egypt. Taking the name "Sabancı," this mansion was bought by Hacı Ömer Sabancı in 1950 and started to be known as the "Equestrian Mansion" because of the horse statue it has in its courtyard. The horse sculpture made by the French sculptor Louis Doumas was placed in the mansion in 1864, and over time, became an integral part of the mansion.

Deciding to live in the mansion in 1966, Sakıp Sabancı finally opened his collection of arts, goods, and calligraphy, which he had accumulated as a hobby for years, to the public. Later, he handed over the mansion to the Sabancı University administration and turned it into a full-time museum. This museum, which opened to the public in 2002, has started to host many different arts and cultural events thanks to the modern art gallery area added in 2005, expanding its reputation internationally.

Would you like to explore this living museum with the Istanbul Tourist Pass and observe the cultural perspectives of Turkish and foreign societies? If your answer is yes, book your place in this magical world right now! Suppose you want to continue to explore the cultural elements and learn the history of Turkey and the Ottoman Empire after you have finished visiting the Sakıp Sabancı Museum. In that case, you can visit Topkapı Palace Museum and continue browsing through the cultural heritage of the Ottoman empire and former civilizations.

Exhibits Inside the Museum

Sakıp Sabancı Museum is divided into different sections with the works of art and collections it contains. One of these sections, the Book Arts and Calligraphy collection, includes a variety of calligraphy and manuscripts elaborated by various artists from the 14th to the 20th centuries. This museum, which has artifacts from the beginning of the Ottoman Empire, contains the rare manuscripts of the Qur’an and Sultan's edicts. These works, which have various sizes, are presented to the visitors on the wall, on the table, or in specially designed glass lanterns. All these pieces at the museum, each carefully written and decorated, carry the cultural and artistic understanding of the past to the present.

Another collection in the Sakıp Sabancı Museum is the painting collection. The creation of the collection started in the 1970s. Since then, it has revealed the changing understanding of arts, painting techniques, and perspective shift from the past to the present. The paintings, created in the past Turkish periods and drawn by foreign national painters who lived in the Ottoman Empire, were heavily portrayed throughout the exhibition. The collection, which has the value of cultural accumulation, hosts the works of many foreign artists and local artists as well. The painting collection perfectly reflects the understanding of drawing and painting from the past to the present and includes essential clues of the modernization process of Turkish society over the years.

As a great lover of art and a man of taste, Hacı Sabancı filled every corner of the mansion with meaningful and detailed pieces of furniture with ornate decorations. As part of the museum, this furniture has antique value and contains clues to European architectural history. For this reason, it is possible to have information about the society in which they were produced by looking at the works of art. 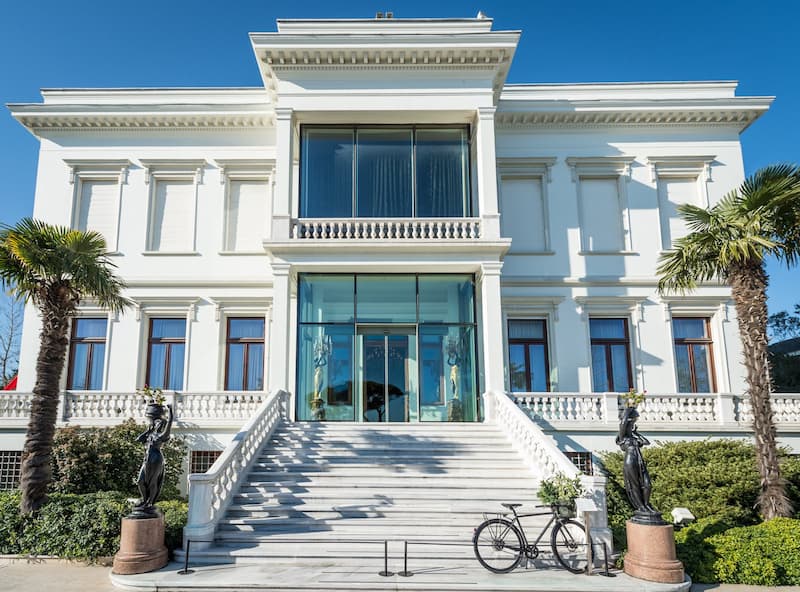 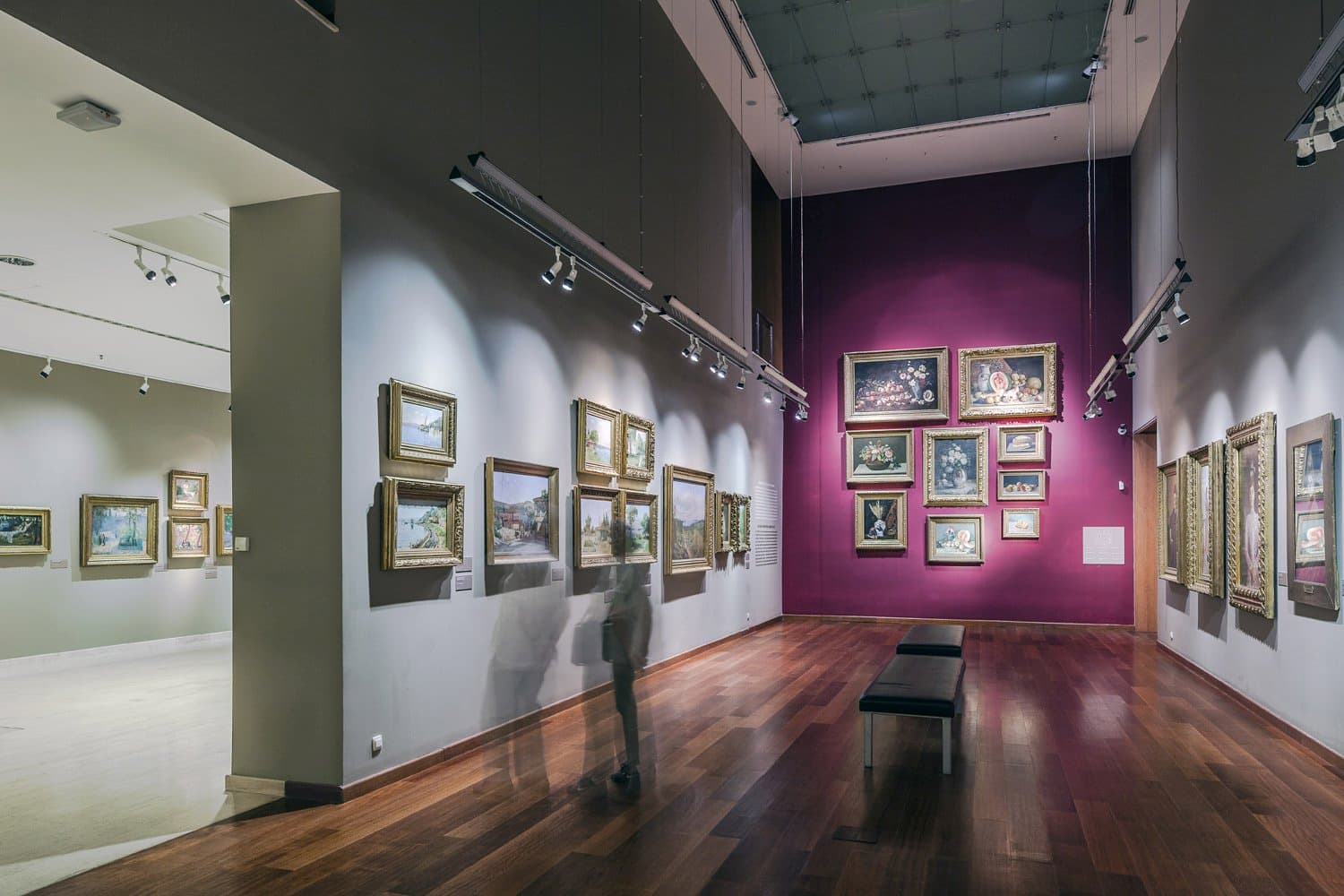 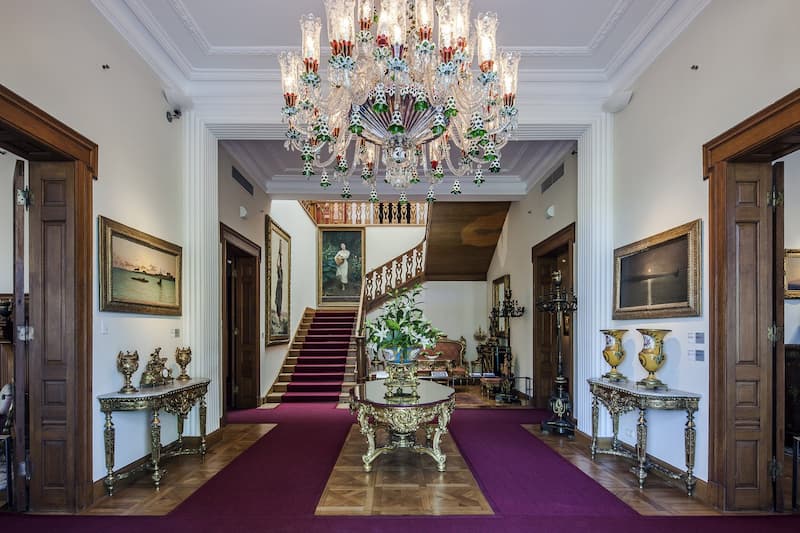 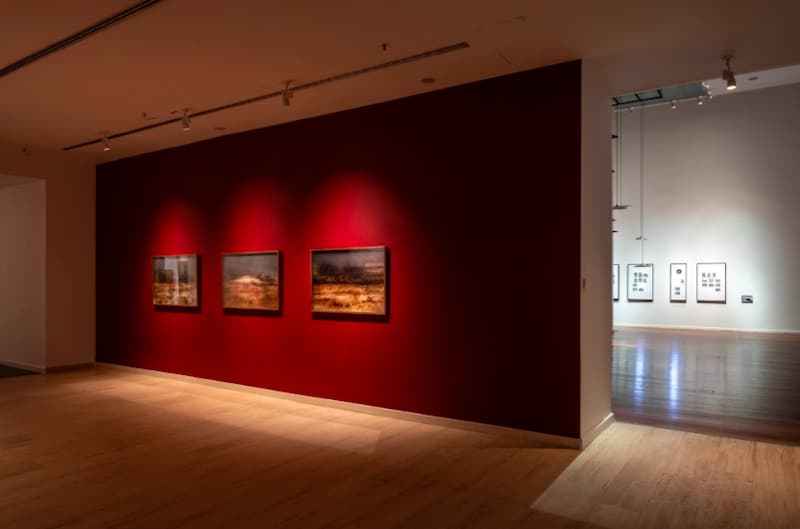 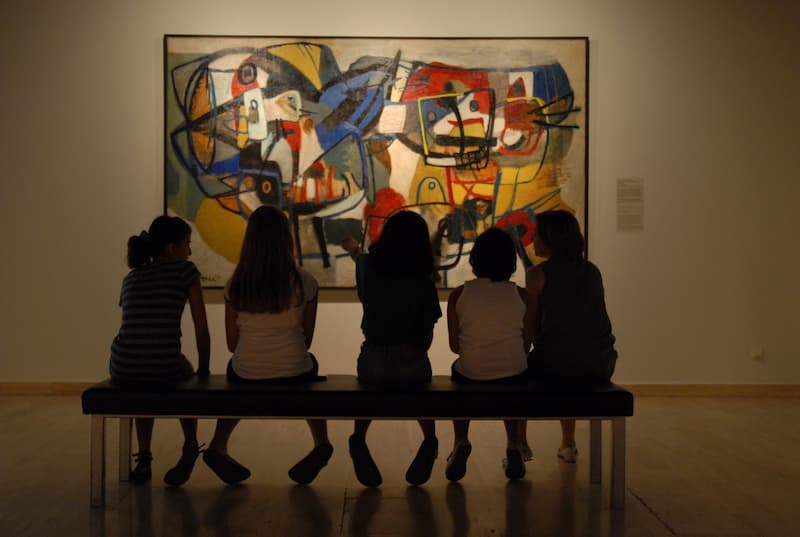 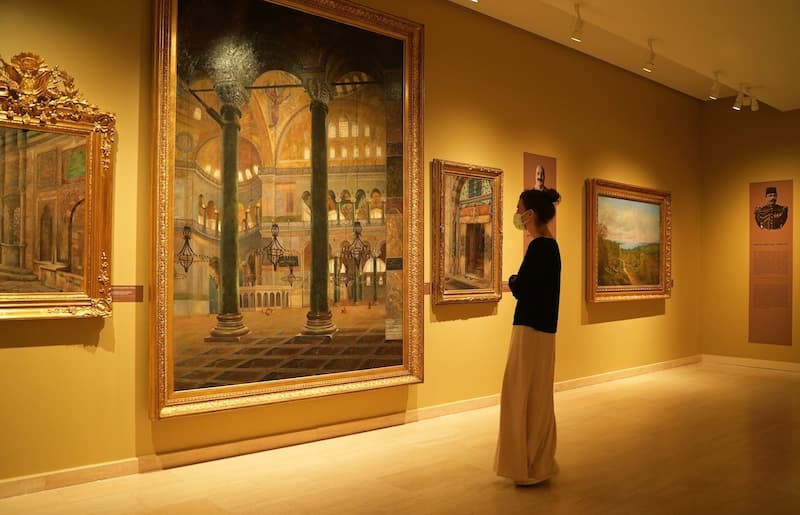 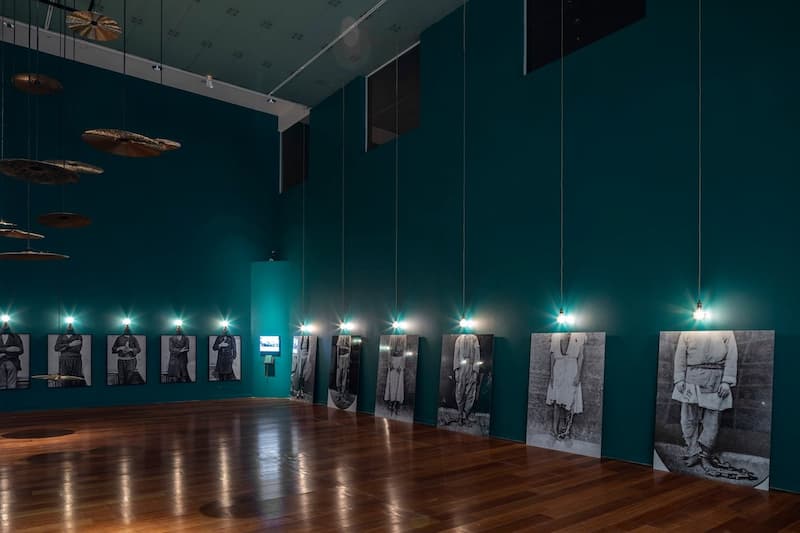 How Many Hours Should I Spare to Visit the Entire Museum?

Sakıp Sabancı Museum is built on a huge mansion, so it is quite possible to find a different piece of art in every corner of the building. If you want to examine and learn about all the works of art without haste, you can finish your visit in a few hours.

Do I Have to Pay an Extra Fee to Enter the Sakıp Sabancı Museum?

Never! With the advantages provided to Istanbul Tourist Pass users, you do not have to pay an entrance fee to enter this museum and many others in Istanbul.

Should I Wait in Line to Enter the Sakıp Sabancı Museum?

No! Sakıp Sabancı Museum, which you can visit without waiting in line by the Istanbul Tourist Pass privileges, awaits all art enthusiasts.

You can visit Sakıp Sabancı Museum at different times on different days of the week. The museum is closed on Mondays because it is a maintenance day. So you can have your visit on any other day of the week between 10:00 am and 18:00 pm.

Who Owns The Sakip Sabanci Museum?