Are you ready to explore the Tiled Kiosk, an Isolated Mansion with Unique Artifacts?

Built as a summer residence in 1472 under the supervision of Ottoman Sultan II. Mehmed, the Tiled Kiosk is positioned within the outer walls of Topkapi Palace. In terms of construction chronology, the Tiled Kiosk is the oldest building in the Istanbul Archeology Museums complex.

Discover the oldest building in the Istanbul Archeological Museums complex!

Nearly 2000 artifacts from the Seljuk and Ottoman periods from the 11th to the early 20th centuries!

This mansion that dates to 1472. It is located within the outer walls of Topkapı Palace and it was originally built by the command of the Ottoman Sultan II. Mehmed as a summer palace. In terms of its construction date, the oldest building in the Istanbul Archeology Museums complex is the Tiled Kiosk.

Between 1875 and 1891, it served as the Hümâyun Museum (Imperial Museum). In 1939, the building was transferred to the Topkapı Palace museum and lost its museum function. In 1953, On the occasion of the 500th anniversary of the conquest of Istanbul, it was designated as a museum again under the name of "Conqueror Museum”. It is now home to the clothes, weapons and edicts of Fatih Sultan Mehmed, the Ottoman Sultan who conquered Istanbul.

The same year, the museum’s name was changed to “The Museum of Turkish and Islamic Arts”. The Tiled Kiosk, which joined the Istanbul Archeology Museums complex in 1981, was reopened to visits in 1992.

The Tiled Kiosk’s Art and Architecture

Tiled Kiosk is a monumental building that reveals the stylistic development of mosaic tile art in the first Ottoman period with new compositions and colors. Geometric compositions and large Kufic and thuluth inscriptions increase the effect in the entrance section. The structure takes its name from the artworks of tiles that it showcases.

The Tiled Kiosk’s architect is not certain, however, some sources state that it was built by Architect Atik Sinan. It is the oldest of the civil architecture examples that Sultan Mehmed II had built in Istanbul.

Although the Tiled Kiosk was built during the Ottoman period, its architectural structure bears great traces of the Seljuk state. The Great Seljuk State was founded in Anatolia at the beginning of the 11th century and became one of the largest empires established in the history of the Turks. For this reason, it was inevitable that the Ottoman Empire would be influenced by the Seljuks in terms of art and architecture, as in the case of the Tiled Kiosk.

The multicultural structure of the Seljuk State, which covers Central Asia and Anatolia, is also reflected in the works of art. In ceramics and tiles, especially human-figured patterns, carvings, and animal figures most prominently appear. In the Seljuk architecture, simple buildings with multi-columns and wide domes are seen, as in the Tiled Kiosk. The mansion is also an excellent example of Turkish wooden house architecture with its four rooms around a sofa in the middle.

In the collections of the Tiled Kiosk Museum, there are around 2000 artifacts from the Seljuk and Ottoman periods dating from the 11th to the early 20th centuries.

Tiles and ceramics selected from these collections are; the Seljuk Period in the room to the left of the entrance, Slip technique and Milet work in the left-opening iwan, Iznik-made in the five-cornered protruding room with the middle hall, Kütahya-made in the right corner room facing Gülhane Park, and Çanakkale-made artifacts in the right iwan that opens to the outside. They are exhibited in a settlement order starting from the left and continuing onwards.

The tile altar of the Karamanoğlu İbrahim Bey Imaret, dated 1432, made with the colored glaze technique that dominated the Early Ottoman period tile art, which is dated to the second half of the 14th century and the beginning of the 15th century, is on the right side of the entrance in the middle hall.

At the end of the 19th century, the mihrab was dismantled by Halil Edhem Bey and transported to Istanbul from the İbrahim Bey Imaret, which was destroyed over time in Karaman. It was mounted in its place in the Tiled Kiosk at the beginning of the 20th century. On the inscription panel of the mihrab, which consists of tile plates with herbal and geometric decoration; the 255th (Ayet-el Kursi of Qur’an) verse of Bakara Surah is written in naskh calligraphy, and the 256th and 257th verses are written in kufic calligraphy.

One of the niches of the left corner room facing Gülhane Park, during the reign of III. Murad (1574-1595), was transformed into a fountain. The peacock figure in the middle of the floral motifs on the mirror stone attracts attention. In the decorations, gold gilding was used with the pencil work technique.

From the two marble inscriptions of twelve couplets written in ta'liq calligraphy on the side walls, it is understood that the fountain was built in 999 (Gregorian calendar 1590) and the Tiled Kiosk was called the "Glass Palace" in those years.

Opposite the fountain, a copy of the 1904 oil painting named “Ab-ı Hayat Fountain”, made by Osman Hamdi Bey, was placed in the final arrangements that began in 2004. Osman Hamdi Bey made this painting from a photograph of him standing next to the fountain.

At the end of the 15th century and the beginning of the 16th century, a brand new era began in Iznik workshops. The communication between the tile masters who had worked as travelers before, settled in Iznik and the Nakkaşhane established by Fatih Sultan Mehmed (1451-1481) in Topkapı Palace accelerated the stylistic development.

One of the best quality ceramics of the Ottoman Period, this multi-colored oil lamp has the word "Kelime-i Tevhid" (accepting the divinity of Allah) written on its neck and was built for the Sokullu Mehmed Pasha Mosque (1571-1572) in Kadırga, Istanbul. It is possible to see the "coral red", the most distinctive feature of the 16th century, in this work.

Tile and ceramic production in Kütahya have shown a parallel development with Iznik since its beginning. Scientific analyzes on tiles and ceramics found in Iznik and Kütahya revealed that the same technology was used in both cities, except for a few differences.

The figure of a winged angel (Seraphim) on this oil lamp hanger, dated to the second half of the 18th century and made for a church, is striking. Oil lamp hangers, usually made in the shape of an egg, are hung on the lamps with a chain.

The plate, in which a giraffe is portrayed in silhouette in the middle of stylized trees, is one of the quality examples dating to the second half of the 19th century. 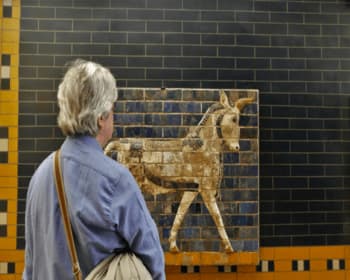 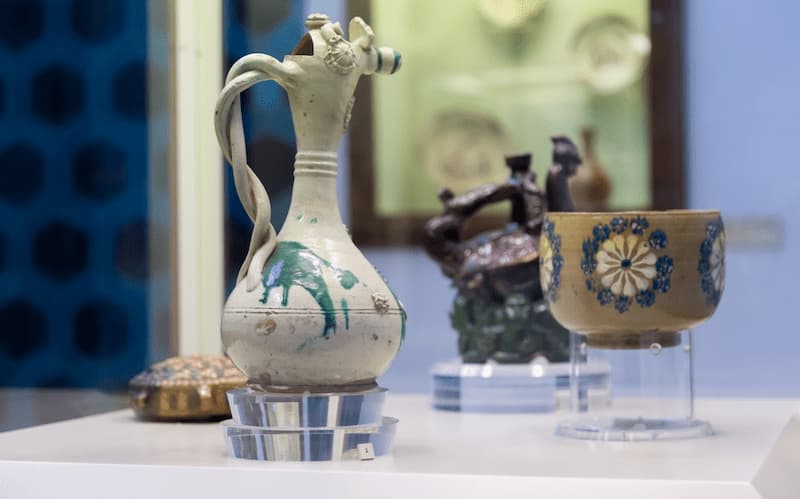 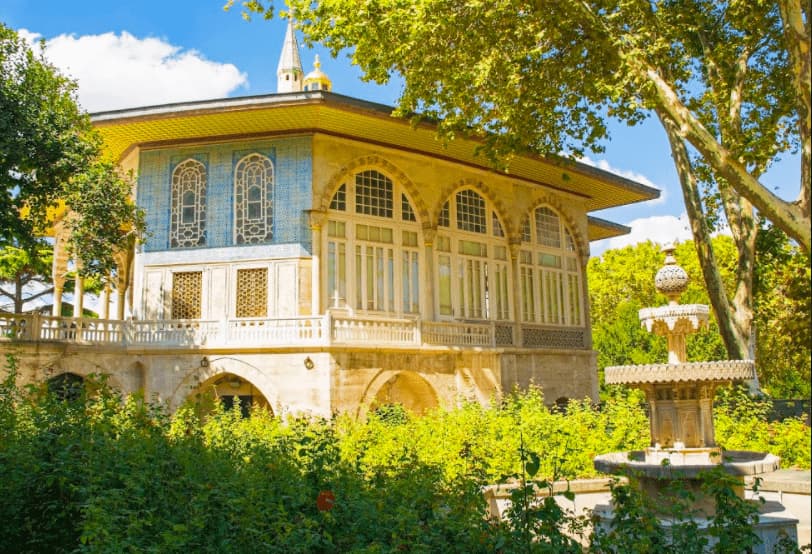 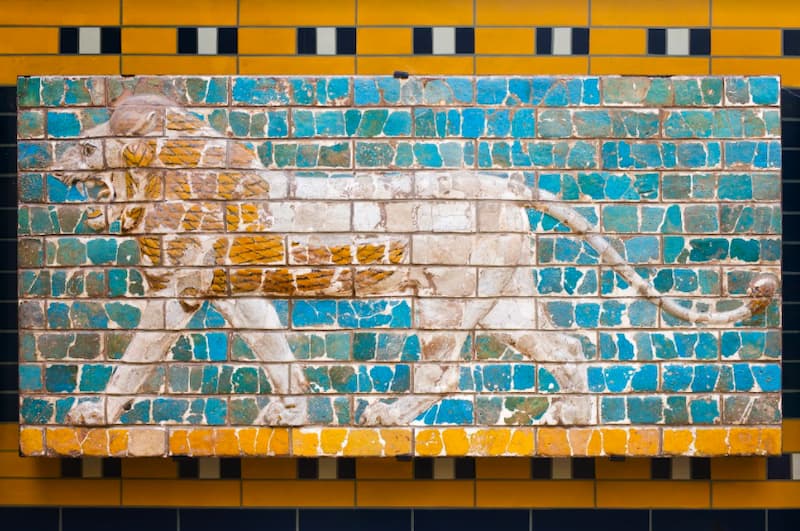 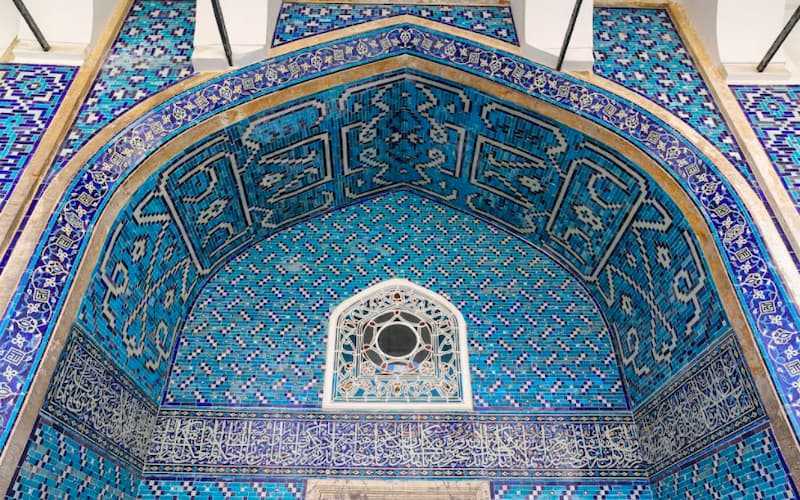 Can I Get in Tiled Pavilion Museum with Istanbul Tourist Pass?

Yes, Generate "Museum Pass" code from your pass account and Scan your QR code in order to get inside the Museum.