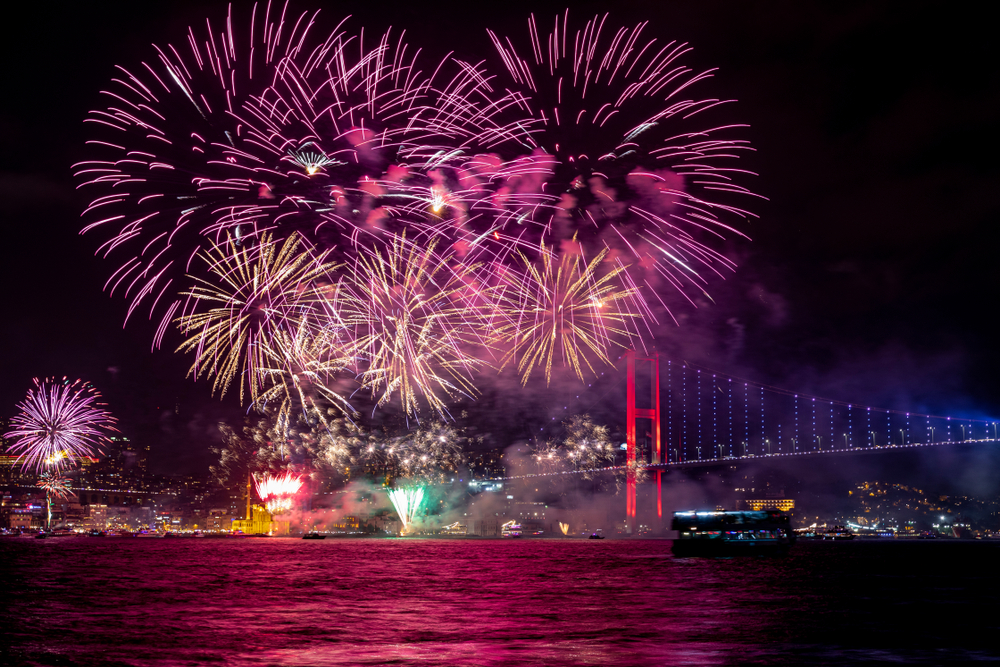 For about 16 centuries, Istanbul is among the most significant cities in the world, ruled by multiple different civilizations. Dozens of historical objects in the city, which preserves the traces of all the civilizations that have called its lands home, have transformed Istanbul into a museum in and of itself. The list of locations to visit in Istanbul, where you may discover a particular beauty in each district, somehow doesn't cease there. Many natural and historical sites, including palaces, mosques, museums, parks, and gardens, are must-sees; especially when New Year's Eve is coming. Because December is also the lowest tourist season in Istanbul, you can have more space and freedom to enjoy the city for yourself. Not only are all of the historic sites open, but they are also quite calm. In short, there is absolutely nothing missing celebrating the holidays peacefully and discovering the city at the same time. So, in order to prepare for your visit to Istanbul, Istanbul Tourist Pass which offers ​free access to 85+ top attractions, tours, and essential local services with over 80% savings, will be there for you during this wonderful time of the year. Here are the must-see places you can visit in New Year with an amazing skip-the-line guided tour with your Istanbul Tourist Pass:

Many magnificent palaces are present in this city, but one of them manages to stand out from the others: the Topkapı Palace. Located in the historic city, in the district of Fatih, this immense palace built in 1469 extends over approximately 70 hectares. This veritable fortress was the place of residence of the Ottoman sultans for 4 centuries. Since 1924 the palace has been converted into a museum. While visiting this large complex of 4 buildings, you will be able to discover the armory, the jewelry, the imperial treasury, the gardens, and the harem. Temporary exhibitions are also organized there regularly.

See it for yourself and get the most out of your visit to Topkapı Palace, the primary residence of the Ottoman Sultans for nearly 400 years, by joining our expert guides on a tour as they explain the fascinating history of this palace. Topkapı Palace has many unique collections on display including weapons of the Ottoman Army, beautiful fabrics, jewels, and art, as well as an amazing collection of Chinese and Japanese porcelain. There is even a Holy Relics Chamber which contains personal items of the Prophet Muhammad, the staff of Moses, and the sword of David, to name only a few. What a collection!

The most visited museum in Turkey, Topkapı Palace is an absolute must-see while you're in Istanbul, so add it to your itinerary now! Less queuing, more viewing! We know your time is precious on holidays, so join us for a guided tour at Topkapı Palace and skip the ticket queue.

The Hagia Sophia is one of the symbols of Istanbul. Built in the first half of the 6th century at the behest of Emperor Justinian, it was originally a church, before becoming a mosque near a military later, after the city was conquered by the Ottoman Empire. This plurality of influence has earned Hagia Sophia this original architectural style, between the Christian church and the mosque.

Until recently, Hagia Sophia housed a museum that traced the rich history of the place, but since 2020 it has reverted to being a mosque.

This holy place is the perfect spot to wish all the good things for the upcoming year and start to think of your New Year’s Resolutions!

The Blue Mosque, one of the world's oldest and most stunning mosques, will take you back in time. Discover Istanbul's spiritual aspect and the culture of the Islamic Ottoman Empire. The Blue Mosque is the city's most recognizable landmark and a must-see for any tourist to Istanbul. It's in the center of Sultanahmet, near to many other sights included in your Istanbul Tourist Pass, so spend one of your last days of the year there and the rest of the day exploring the finest of Istanbul's Old City!

Istanbul’s Grand Bazaar is definitely a must-see while visiting the city. A true symbol of Turkey, it is also the largest indoor market in the world, which covers 45,000m². Including its open part as well, it spans nearly 60 streets in total and has 4,000 shops, and can accommodate more than half a million visitors per day.

The Grand Bazaar is organized by districts, where the different types of crafts are grouped together: textiles, carpets, mosaics, jewelry ... In the heart of the bazaar is the Bedesten, which can be considered as the flea market of Istanbul.

If this large market is very touristy, it is also widely frequented by Istanbulites. The atmosphere is particularly warm, especially during this time of the year.

After an amazing guided tour to the Grand Bazaar included in your Istanbul Tourist Pass, you can buy interesting and sophisticated gifts for your loved ones!

Cruising the Bosphorus at night is one of th bst experiences you can have in Istanbul. Imagine the shining lights of the city special for the New Year, Maiden's Tower and Bosphorus Bridge… They provide a magical setting for an evening of authentic Turkish cuisine and entertainment. After dinner, you can sip your Turkish coffee and enjoy traditional music and dance performances from different regions of Turkey. It will definitely be a highlight of your trip to Istanbul!

With your Istanbul Tourist Pass, you can reserve your place online right away for this amazing event for free. But don’t forget that the Cruise operates every day except New Year's Eve and Valentine's Day. So try to enjoy this trip a few days before New Year’s Eve.

We must say that New Year's Eve celebrations in Istanbul, they-are-legendary! In order to properly celebrate New Year's Eve is the only city located on two continents, we suggest you go to reserve before since Istanbul is bustling on New Year's Eve. If you prefer to spend your time outside, you may go to Nişantaşı’s massive street celebration.

Istanbul Tourist Pass, the one and only sightseeing pass with free access to 85+ attractions and services, will make your trip unforgettable! Get your Pass now and enjoy the best time of the year in this magical city!