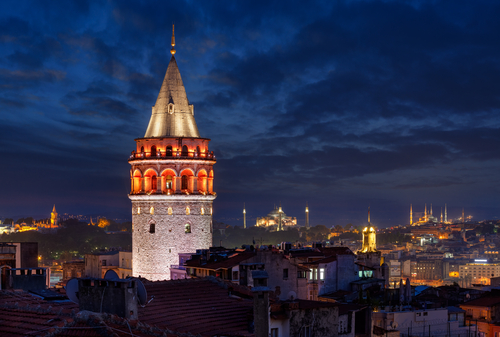 Galata Tower is one of the most magnificent sights in Istanbul, overlooking "Beyoglu" and "Karakoy" from its incredible location. Its colorful lights can be seen at night from all over the city, so it is one of the most famous tourist destinations among visitors in the city. Galata Tower is visible to anyone who visits Istanbul and walks along with one of the city's most popular and oldest avenues, such as Taksim or Eminönü. This tower is one of the city's most well-known tourist attractions, whether because of its tradition, geometric shape, or special geographic location. Hence, it is not surprising that it is on the visit list for all tourists in Istanbul, here is a look at the history of Galata Tower!

Although the exact date of construction of the Galata Tower is unknown, historical records suggest that it was constructed during the reign of the Byzantine Emperor Justinian in about 507 AD. The Genoese called the tower "Christian Torres," or the Tower of Christ, while the Byzantines called it "Migalus Pyrgos," or the Great Tower, at the time. The Galata district, colonies of the Republic of Genoa, served as a chain of economic and commercial centers in the Mediterranean and the Black Sea during the Genoa era, when the tower took on its current form.

The tower was severely damaged by an earthquake in 1509, but it was rebuilt by the renowned Ottoman architect "Hayreddin," who also designed the Sultan Bayezid II complex in Edirne during the reign of the Ottoman Sultan Suleiman the Magnificent.

The tower was used to detain inmates who were forced to serve in the shipyard at the time, and by the end of the sixteenth century, an observatory had been attached to the roof, but the tower was doomed to become a jail again during Sultan Murad III's reign between 1546 and 1595.

The tower was used for a brief time by the Mehter division, an Ottoman military division before the seventeenth century began, and then became a fire observatory in 1717 due to its location as a high point in Istanbul at the time. The tower was devastated by fire in 1794, but it was rebuilt under Sultan Selim III's rule.

The 219-foot (66.90-meter) tower is now a popular tourist destination in Istanbul, with crowds lining up to climb to the top for a breathtaking view of Istanbul's skyline from the balcony. The elevator carries guests up to seven levels, but the final two floors are only accessible by stairs.

Where is Galata Tower?

The Galata Tower, as its name suggests, is situated in the Galata district of Istanbul just above Karaköy and it has become one of the city's most significant symbols. From the top of the tower, visitors can see the Istanbul Bridge, which separates Istanbul's Asian and European sections, as well as the Golden Horn Bridge and historic peninsula.

Istanbul Tourist Pass allows you to visit over 85 attractions while saving money! You will save up to 80% with the Istanbul Tourist Pass. You'll also save a lot of time with the Pass and you won't have to wait in line for tickets. Now all you have to do is check your pass on your phone and you're good to go!