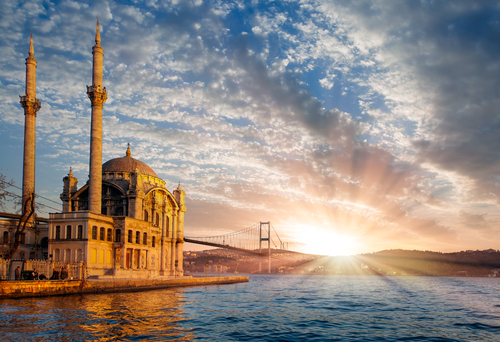 Thanks to its deep history which is comprised of many empires, cultures and religions, Istanbul is one of the most culturally rich and diverse cities in the world. Because of this, you can find numerous historically significant sites here, from churches to various museums to fortresses. But there is no doubt that the influence of the Ottomans in Istanbul was the most significant, so there are many old mosques that still stand today. Since these are some of the most interesting parts of the city, we prepared this guide so you don’t miss these amazing historic mosques in Istanbul.

Even though it does not function as a mosque anymore, Hagia Sophia was a mosque before being converted into a museum, so you can still see all of the many mosque parts of the building as well as many Islamic artworks and relics inside. Nonetheless, Hagia Sophia Museum is one of the most famous attractions in the world for a reason. It is no wonder that this cornerstone of architecture is considered the 8th wonder of the world. Built in the 5th century as the Greek Orthodox Christian patriarchal cathedral, this magnificent monument witnessed two of the largest empires in the history of mankind. It is said that Hagia Sophia alone changed the course of architecture and stayed as the largest cathedral in the world for around 1000 years. When Mehmet the Conqueror took Istanbul, he converted this place into a mosque. In 1931, it became a museum.

Inside, its historical mosque parts like the minbar, mihrab, low hanging chandeliers and Islamic inscriptions still catch the eye easily. Other than that, you can see many amazing relics and artworks, like urns, columns and doors. There are countless amazing Christian mosaics on the walls too.

Easily the most famous mosque in not only Istanbul but the whole country as well, Sultan Ahmet Mosque still draws thousands of visitors from all around the world each month. Famously known as “Blue Mosque” amongst tourists, it gets this name from the beautiful blue Iznik tiles that decorate the inside. Built in 1616 during the reign of Sultan Ahmed I, this mosque is a marvel no matter where you look at it from. Like other imperial mosques of Istanbul, it is was built as a kulliye (complex), so it also includes a madrasah, Sultan Ahmed I’s tomb and a hospice. This grand monument has six minarets and five main domes. Its entire design is perfectly symmetrical. Inside, you will see the peak of Ottoman mosque architecture as the atmosphere and the artistic value of this mosque is simply unparalleled. This mosque is definitely one of the most important parts of the Old City of Istanbul.

Designed by Mimar Sinan for the famous Ottoman emperor Suleiman the Magnificent, Suleymaniye Mosque is one of the  top mosques in Istanbul . It was built in 1557 at the highest point of the historical peninsula. It has a very large courtyard at the entrance with a fountain at the center. While walking to the entrance in this yard, you get to see the amazing exterior built with marble, granite and porphyry along with its large dome and four minarets. When you get inside, you will be amazed just like you would in any other imperial mosque. The main dome, decorations on the walls, the spherical design, religious inscriptions and the low-hanging large chandelier; all of them play a role in creating a unique atmosphere.

Another spectacular work of Mimar Sinan, Rustem Pasha Mosque was built for the grand vizier of Suleiman the Magnificent, Rustem Pasha, who was also the husband of one of the daughters of Sultan Suleiman. Its main feature that sets it apart from other old mosques in Istanbul is that it is built above the street level, on top of a series of shops. These shops supported the mosque both physically and financially.

There are two Mihrimah Sultan Mosques in Istanbul. While that may seem confusing, learning the amazing story behind this fact will transform this confusion into bewilderment.

These two mosques were made by the famous chief Ottoman architect Mimar Sinan by the request of the daughter of Sultan Suleiman, Mihrimah Sultan. The mosque in Uskudar was built on a high hill while the one in Edirnekapi was built in a rather unknown place. The interesting thing is, in Persian, Mihr-u Mah means “sun and moon”. Knowing this, Mimar Sinan built the mosques in such locations that every year during April and May, sunsets down behind one of the mosques and the moon rises behind the other.

Apart from this amazing story, the mosques too are magnificent as they are examples of Mimar Sinan’s earlier works. Mihrimah Sultan Mosque in Uskudar is the smaller one. It has one big main dome like most of Sinan’s works and 3 semi domes. Its thin minarets, various Islamic scriptures and great interior design definitely stand out. Mihrimah Sultan Mosque in Edirnekapi is a bigger mosque with a courtyard. This courtyard is surrounded by semi-open corridors with an ablation fountain in the middle. Its inside is more decorated and modern, caused by the restorations.

While its name may make it seem like this mosque is new, its history goes back more than 4 centuries. Its construction was ordered by the wife of Sultan Murad III, Safiye Sultan, in 1595. But due to conflicts in the court about the mosque’s economic implications, the construction was stopped midway in 1603. After this, the mosque gradually decayed and was mostly destroyed in the Great Fire of Istanbul in 1660. It was completed by the Turhan Sultan, who was the mother of Sultan Mehmed IV. Since Turhan Sultan was the second Valide Sultan to have a part in the construction of this mosque, the mosque was named “Yeni Valide Sultan Camii” (New Valide Sultan Mosque), but this gradually shortened to Yeni Camii (New Mosque).

In terms of aesthetic value, this mosque is one of the best historic mosques in Istanbul. This large building looks beautiful from the outside, especially with the yellow lighting that turns on around it after the sun sets. Its 66 domes and semi-domes along with its 2 minarets stand out from the rest of the city. Since it is an imperial mosque, it was built as a complex, which also included a primary school and a spice bazaar.

The inside of the mosque is breathtaking as the natural lighting provided by the countless windows makes it so that every piece of art on the walls is clearly visible. Iznik tiles of various colors create a colorful sight while Islamic calligraphy plates stand out amongst the detailed walls of the interior. When you take all of these into account, New Mosque is definitely among the Istanbul Classics.