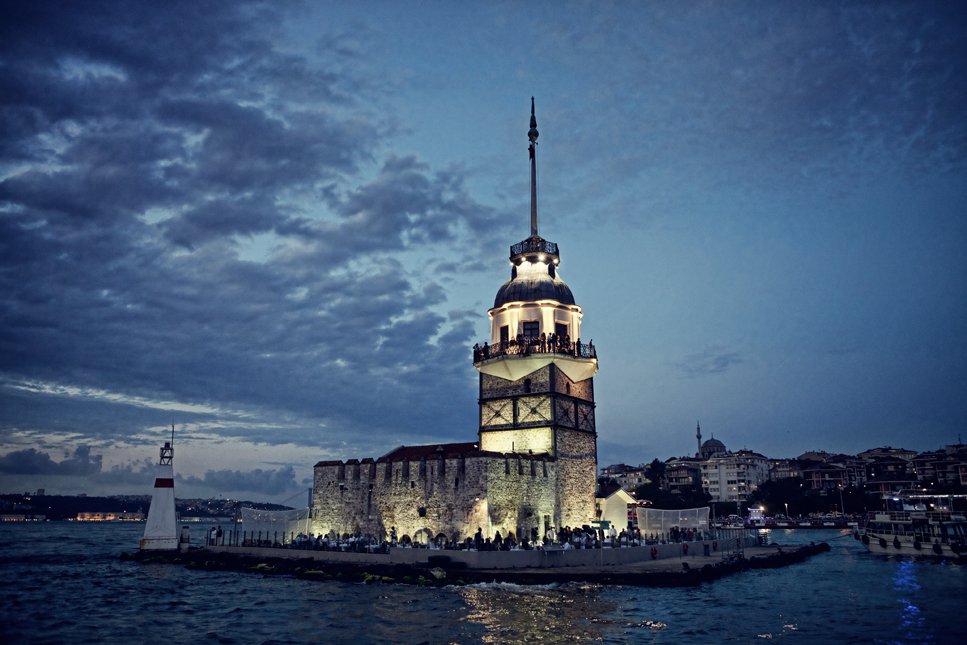 The Most Romantic Restaurant of Bosphorus: Maiden’s Tower

The Maiden’s Tower is definitely one of the most iconic attractions of Istanbul. You can see this iconic islet tower in many pictures of the Bosphorus. Even though it is quite small, it is enough to draw tens of thousands of visitors every month. If you want to visit the tower, watch the city from its top and enjoy a meal in the Maiden’s Tower restaurant, here is everything you should know.

While the Maiden’s Tower Istanbul we know today was built in 1725, there isn’t any exact date of construction for the original tower. Historians estimate that in the year 1110, a wooden watchtower was built there by the Byzantine Emperor Alexius Comnenus. It was surrounded by a stone wall that protected the tower and its crew. Ottomans rebuilt the tower after they took Istanbul, but that tower was heavily damaged due to a fire that took place in the year of 1719. Rebuilt in 1725, it has been standing tall ever since, but it saw many other restorations too, namely in 1731, 1734, 1763, 1832, 1945 and 1998. An inscription with Sultan Mahmut II’s signature of marble (called “tughra”) was put above the Maiden’s Tower’s door by Rakim Efendi, a prominent calligrapher of his time. In 1857, a lantern was added to the tower and it started to be used as a lighthouse.

How to Go to the Maiden’s Tower

Maiden’s Tower is located near the shores of Uskudar, in the Salacak neighborhood. From the European side, you can directly take small ferries to the Maiden’s Tower from Kabatas. During weekdays, these ferries take off hourly, starting from 12 PM and lasting until 6 PM. In weekends, it starts at 10 AM and the last ferry takes off at 6 PM. If you do not want to wait until the top of the hour, you can go to Uskudar with either ferries from Besiktas or Eminonu, or use Marmaray to go to the Uskudar stop. Then, go to the Salacak neighborhood and wait for the shuttles that take off every 15 minutes, starting from 9.15 AM and continuing until 6.30 PM.

Other than providing unparalleled views of Istanbul from its roof, Maiden’s Tower also has a restaurant on its first floor. Be sure to make a reservation before you go since this place is almost always packed. We highly recommend that you enjoy the great dishes of this restaurant accompanied by one of the best views in Istanbul, especially if you are on a Turkish Food Tour.

Legends About the Maiden’s Tower

Maiden’s Tower legends are tied to its vast history. One of the legends states that there was once an emperor who had a daughter whom he loved very much. An oracle prophesized that she will be bitten by a venomous snake in her 18th birthday and die. Terrified of this prophecy, the emperor decides to lock his daughter as far away as possible from the land to keep her away from snakes. For this purpose, he orders the construction of a tower in the middle of Bosphorus for her daughter to stay in. After the tower was built, the emperor regularly visited his daughter, making sure that she was in good condition. On her 18th birthday, the emperor brings a basket of fruits to the tower to celebrate her escape from the prophecy. But when she tried to reach the basket to grab one of the fruits, an asp comes out amongst the fruits and bites and young woman. She dies there, like the oracle prophesized. This is where the name “Maiden’s Tower” comes from.

Another legend speaks of Hero and Leander. Hero was a priestess sworn to the goddess of love, Aphrodite, and Leander was a young man who lived at the other side of the strait, Abydos. Hero was put in a tower by Aphrodite to ensure her sanctity. One day, Leander fell in love with Hero and started swimming every night across the strait to make love to her. To guide him while he was swimming, Hero would light a lamp every night from her tower. A whole summer passed with this routine. During one cold winter night, strong winds blew out the light in Hero’s lamp and shook up the sea with large waves, so Leander lost his way and drowned. Leander’s lifeless body was washed upon the shores of the island of Hero’s tower. When she saw this, she threw herself from the top of the tower in grief and died. The tower’s older name, Leander’s Tower, comes from this legend, though the story is thought to have originally happened in the Dardanelles or Hellespont.

Other Attractions Near the Maiden’s Tower

While you are in the Uskudar, you can start exploring the Asian Side Istanbul, particularly the Uskudar and Kadikoy districts. After that, if you loved the view of Istanbul and the Bosphorus from the Maiden’s Tower, consider booking a Bosphorus Cruise to get the full experience.