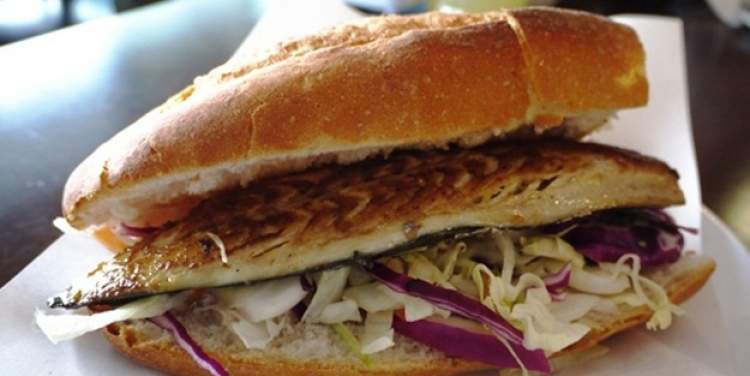 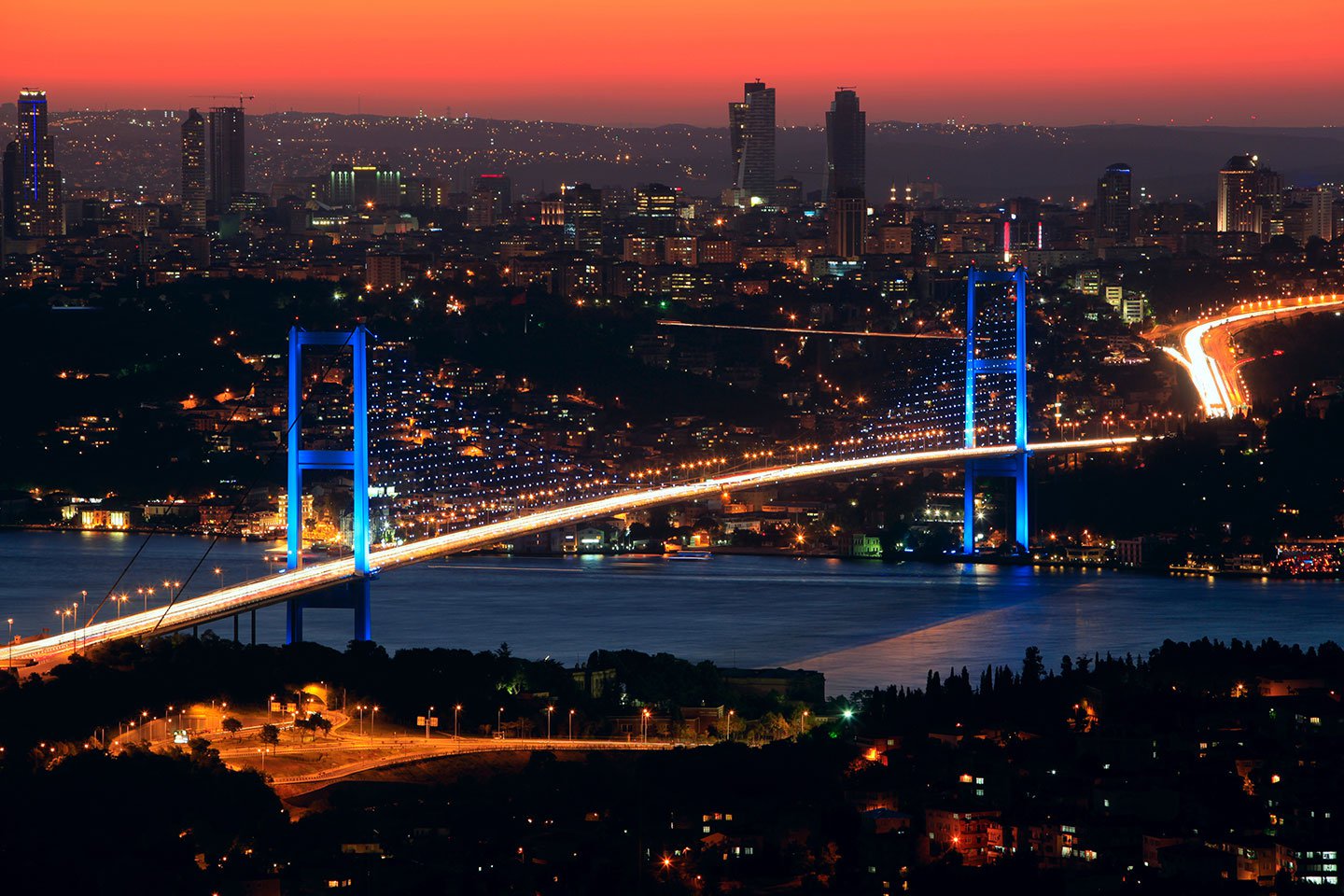 An experience not to be missed!

At night, the view from the already amazing Bosphorus Strait is even better! The shining lights of the city, Maiden's Tower and Bosphorus Bridge provide a magical setting from which to enjoy an evening learning about the city from you guide while tasting the classic Turkish street food, "Balık Ekmek", which is a white bread sandwich with a fillet of fried or grilled fish and vegetables served with chips.

Meet your guide, who will be holding a white flag with the Istanbul Tourist Pass logo, at 7.45pm at the entrance to the Spice Bazaar. After a few minutes walk, your guide will take you to the boat which departs from the port at the entrance of the Golden Horn and you'll start your cruise on the Bosphorus, the legendary waterway of Istanbul. A trip to Istanbul is not complete without a cruise along its dazzling waters which divide Europe and Asia.

From your boat, view the incredible sights along the Bosphorus including Ortaköy Mosque, the Bosphorus Bridge and Rumeli Hisarı Fortress which is the massive fortress built by Mehmet the Conqueror in just three months as he prepared to conquer Istanbul. Also noteworthy are the 19th century mansions of the Ottoman elite and the "gingerbread palaces" and hunting lodges of the Sultans.

At the end of this unforgettable trip, you will be returned to the same port at the Golden Horn from which you departed.

The cruise departs at 8:00 PM but you need to be at the meeting point by 7:35 PM . Duration of the cruise is around 2 hours.
The cruise operates between the 1st of April and 30th of November.

The meeting point for the cruise is in front of the main entrance of the Spice Bazaar, also known as the Egyptian Bazaar, at Eminönü.

To get there, take the T1 tram and get off at Eminönü station. The guide will be holding a flag with the logo of Istanbul Tourist Pass.

If there is one thing that everyone agrees about Istanbul, it is the fact that the Bosphorus is absolutely beautiful, no matter where you look at it from. This natural strait has been the favorite of Istanbulites for centuries, and it is no different today. One can even argue that it is even more beautiful today with many more attractions near the shores and the bridges. But what most people forget is that the Bosphorus is even more beautiful at night! If you are interested in an amazing Bosphorus night cruise in which you will try out one of the most popular street foods of Turkey and watch the beautiful shores of Istanbul at night, keep on reading.

What Exactly is the Bosphorus?

Istanbul is a unique city, and it owes this to many factors; but one of the most prominent among them is the fact that the city sits on two different continents: Europe and Asia. Bosphorus is the natural strait that makes this happen. Because of this extremely important feature of this city which gives Istanbul many geopolitical advantages, it has been the focal point of countless countries for centuries.
Most tourists think that there are two Bosphorus bridges, but there is actually a third one that was recently finished in 2016. If we were to name the bridges from old to new and south to north, the list would be: 15 Temmuz Sehitler Bridge, Fatih Sultan Mehmet Bridge and Yavuz Sultan Selim Bridge. While the first two is fairly close to each other, the third and the last bridge is way up north in the Bosphorus.
One of the greatest aspects of this Bosphorus cruise will be seeing all the gorgeous places along the shores of Istanbul. This can even help you decide where to visit in Istanbul next, whether it be Bosphorus restaurants, cafés with Bosphorus view or Bosphorus hotels.

What Will You See in Bosphorus Night Cruise?

Golden Horn: Also known as “Halic” amongst locals in Istanbul, Golden Horn is an inlet of the Bosphorus Strait. It gets its name from the horn-like shape it creates for the Fatih district. Where the “Golden” adjective came from is unknown, but it is guessed that it is either because of the wealth it brought to the city through marine trade or the beautiful, almost gold-like color you can see during the sun sets near the Golden Horn. It is 7.5 kilometers long and currently has 5 main bridges that connect the both sides. While you won’t tour the entire Golden Horn during your Bosphorus night cruise, you will get a nice view of this estuary that was once the northern border of the Old Istanbul. Because of this, Fatih district is filled with culturally and historically significant places that you must visit.
Maiden’s Tower: One of the most beautiful landmarks of Istanbul is the Maiden’s Tower, also known as “Kız Kulesi” amongst Turkish people. Almost everyone knows about this tower, but did you know it looks absolutely stunning at night? Its history is just as interesting as its design. It was first built in the year of 1110, but for many centuries, it was rebuilt many times since various natural disasters and fires wore it down. But the one we know and see today is the one that Mahmud II built back when Ottoman Empire was present. After its restoration in 2000, you can visit it today as both a museum and a restaurant.
Ortakoy Mosque: While you are making your way up on the Bosphorus Strait, one of the most magnificent historical landmarks you will see just next to the Marmara Sea is the Ortakoy Mosque located next to the 15 Temmuz Sehitler Bridge. It is also known as the “Buyuk Mecidiye Mosque” in Istanbul. It was built in 1853 by the Ottoman Sultan Abdulmecid. Its thin and elegant baroque style easily distinguishes it from the other mosques in the city. Not only that, but its unique location next to the Bosphorus makes it a favorite of the tourists.
Rumeli Hisari Fortress: While there are countless attractions running along the coasts of Bosphorus, none of them is as hard to miss as the Rumeli Hisari Fortress. This large fortress has been standing tall for more than five centuries after it was built after the conquest of Istanbul. In the past, it served as a guarding point for the Bosphorus, but today, you can tour inside this amazing historical fortress and take a look at the Marmara Sea from its towers. Also, during you Bosphorus tour, you will get to taste “Balik Ekmek”, a popular Turkish street food that is served as a white bread sandwich which has a fillet of grilled fish with chips.

How to Get to the Bosphorus Night Cruise?

Istanbul Tourist Pass’ Bosphorus Night Cruise departs from Eminonu, which is a common neighborhood that is easy to access through public transportation. All you need to do to get there from the European side is to get on the Kabatas – Bagcilar tramway line and get off at the Eminonu station. After that, look for the Egyptian Bazaar just next to the stop as the meeting will be there. Remember though, you need to be there at least 10 minutes before the tour starts.

If you are going to come from the Asian side of the Istanbul, you can use the ferries to Eminonu from either Kadikoy or Uskudar to easily go to the meeting point.

Before you depart from Eminonu for your Bosphorus tour at night, you can visit a couple of great attractions in Fatih. First, you have to try a Blue Mosque tour. Also known as the Sultanahmet Mosque, this place gets its name from its unique blue Iznik tiles. It is also one of the oldest and visually striking mosques of Istanbul, so it is a must-visit if you are in Fatih.

Then, you can also give Serefiye Cistern a visit. It is not as big as the Basilica Cistern, but it is still a very unique place with a stunning atmosphere.