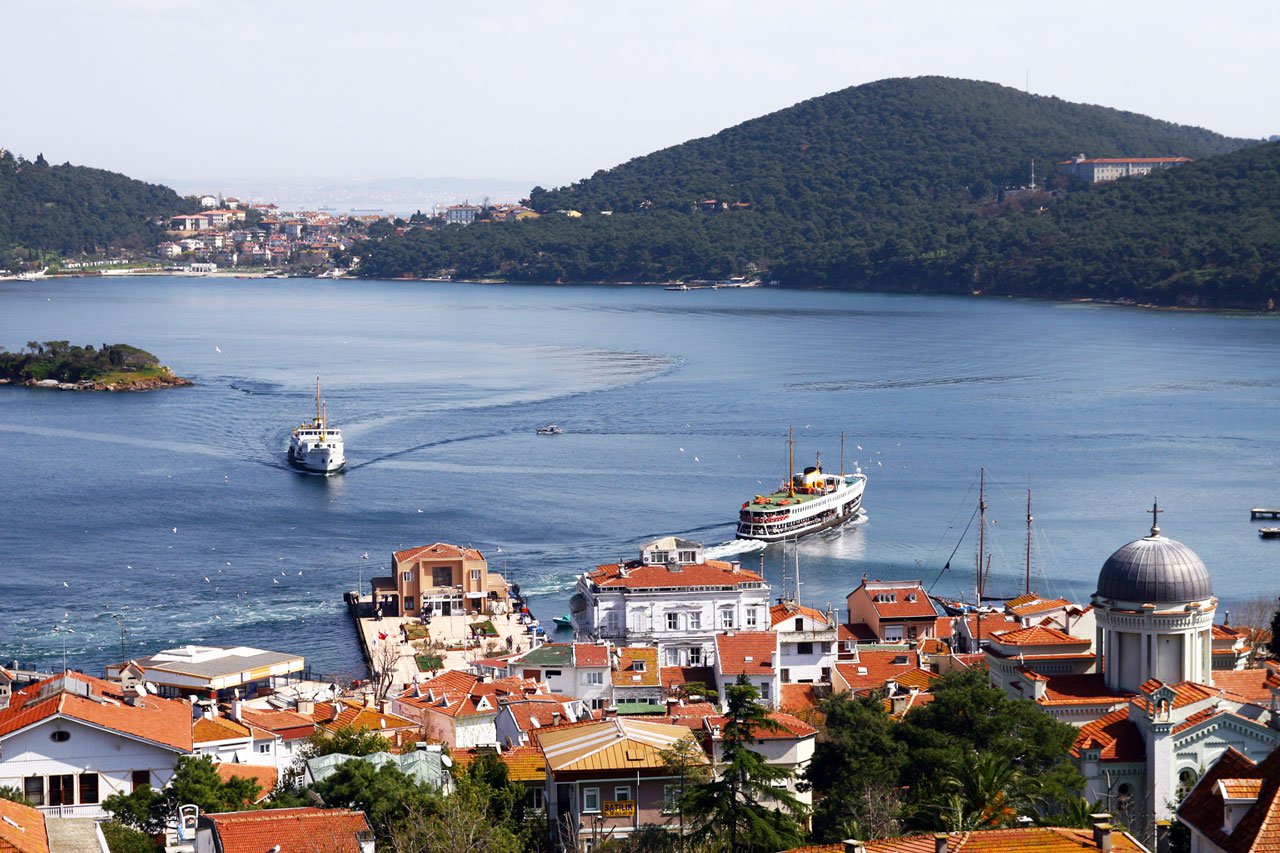 Spend a day in the beautiful Princes' Islands

The Princes' Islands are a group of islands near the coast of Istanbul in the Sea of Marmara. There are 9 islands in total but the 4 most visited are Büyükada, Heybeliada, Burgazada and Kınalıada.
The Islands have a very interesting and sad history. They were inhabited by exiled princes of the Byzantine Empire and later by members of the Ottoman royal family, which is how they came to be called the "Princes' Islands".
You might be surprised to learn that Leon Trotsky lived in a house on Büyükada for 4 years! Another interesting resident was the second English Ambassador to Constantinople, sent by Queen Elizabeth I, who lived in and is buried on Heybeliada.
For architecture and history lovers there are many places to discover, starting with the mansions built by wealthy Istanbulites in the 19th century, a huge abandoned Greek orphanage and many famous monasteries such as Ayia Yorgi and the Halki Seminary.
We highly recommend that you visit the islands of Büyükada and Heybeliada. Please be aware though that they are very popular places in the summer and are often very crowded. You might also be stranded for a while in very bad weather if the ferries cannot sail!
An intersting fact about the Islands is that no motorised vehicles, except official or service vehicles, are allowed. So be prepared to enjoy a day out in nature on foot or by renting a bicycle! Alternatively, you might choose to hire a horse and carriage for a real "old world" experience.

Transportation to and from 1 of the big islands (Büyükada or Heybeliada) is included with the Istanbul Tourist Pass.

Take the T1 tram line and get off at Eminönü station. Cross to the sea side and walk towards the bus station. The port of the company "Turyol" will be on your right, next to the bus station. The specific port has a banner which says "Adalar" (the Turkish name for the Princes' Islands).

As almost every other person who have visited Istanbul can tell you, no Istanbul tourist tour is over without a Istanbul Princes’ Islands tour. These islands host many natural and historical wonders waiting to be discovered, so if you are planning a trip to the city of Istanbul, add a Princes’ Islands tour to your list and get ready for an adventure.

The Princes’ Islands, which are called Kizil Adalar or just Adalar in Turkish, are a team of 9 small islands in the Sea of Marmara, only 4 of which are open to public: Buyukada, Heybeliada, Burgazada and Kinaliada. They get their name from the fact that many Byzantine princes were exiled here, along with some of the family members of late Ottomans.

During the 4th, 5th and 6th centuries, Byzantines built monasteries and churches in the Princes’ Islands. These churches and monasteries along with the other habitats in the islands were occasionally pillaged. After Ottomans took the Princes’ Islands together with Istanbul in 1453, the islands did not get much attention other than some occasional exiles. They continued to be places mainly for monasteries with small amounts of people living in small villages.

Until the 19th century, a good majority of the people that were living in the Princes’ Islands were Turkish people of Greek ethnicity. But in the 19th century, they started to get some attention from the wealthy people who have travelled to the islands with boats and built their cottages and houses. After ferries arrived in the middle of the 19th century, the population of the Princes’ Islands quickly rose up, with many schools, summer houses, military establishments and mosques being built. At the start of the 20th century, Princes’ Islands became quiet and peaceful regular living places.
After the proclamation of the republic, Mustafa Kemal Ataturk came to the islands every year starting from 1928 to rest in the Yacht Club. Ismet Inonu also had house in the Heybeliada, which was transformed into a museum later. Between the years of 1929 and 1933, Leon Trotsky lived in Buyukada.
After the World War 2, many villas and pavilions were built in Princes’ Islands Istanbul by wealthy people. After the Greeks were subjected to forced immigration in 1964 and many people from the eastern parts of the Anatolia began coming to the islands, the social structures of the islands changed drastically.

Let’s talk about the islands themselves that you’ll see during your Bosphorus cruise.

The most popular island among both locals and tourists, Buyukada is also the largest island among the Princes’ Islands with a surface area of 5,36 km square. You’ll see this place a lot in Bosphorus boat tours in Istanbul. Since no motor vehicles are allowed on any island, your best form of transportation will be renting bikes. After that, you can visit the famous Aya Yorgi Church up on the highest hill on the Buyukada, Yucetepe. Built in 1905, this church attracts crowds of people from across the world on 23 April and 24 September. After that, come back to the center of the island and grab an ice cream from the many ice cream vendors on the streets. Next, make your way to the Adalar Museum (Museum of the Princes’ Islands) and discover the past of the islands with fossils, archive documents, photographs, documentaries and more. Last but not least, do not leave Buyukada without discovering its wonderful picnic areas and beaches. Dilburnu Natural Park, Blue Beach Buyukada, Ada Beach Club, Aya Nicola Beach and Halik Koyu Family Beach are among the best choices.

The second largest island on our chain is the Heybeliada, with a surface area of 2,34 km square, about half the size of Buyukada. After renting a bike like in Buyukada, our first recommendation is visiting the Inonu House Museum. One of the most important Princes’ Islands museums, this historical house once belonged to the second president of Republic of Turkey, Ismet Inonu. It was later transformed into a museum by Inonu Foundation. In it, you can see the life of Ismet Inonu and the style of the 1940s with various photos, furniture and objects. After that, you can visit the Huseyin Rahmi Gurpınar House Museum too if you would like to get to know one of the most important writers in Turkish literature. Then, make your way to the Halki Seminary, formally known as the Theological School of Halki. This facility was converted into a school of theology from a monastery and includes dormitories, a library and the Chapel of the Holy Trinity. Before leaving, you should give the Ada Beach Club a visit and walk in the Degirmenburnu Natural Park.

The third largest island among Princes’ Islands is Burgazada with a surface area of 1,5 km square. The most famous and loved attraction in the island is the Sait Faik Abasiyanik Museum, which used to be the home of one of the most famous and significant Turkish writers in history. There, you can see many objects, photos, letters and more that accompanied the loved author’s life. After that, you can go to the Kalpazankaya Restaurant which he used to visit often, and spoke about in his stories. Next, walk to the Aya Yani Church which is just across the Sait Faik Abasiyanik Museum. As a great final touch, visit the Madame Martha Cove, which is a dream-like cove for swimming and camping.

Last but not least, we have our smallest island among the Princes’ Islands archipelago, Kinaliada, with a surface area of 1,3 km square. It literally means "Henna Island" in Turkish since the land has a reddish color caused by the past iron and copper mines. Among the 4 biggest Princes’ Islands open to the public, Kinaliada is the least forested one. Because of its small size, you can easily walk anywhere. Our first suggestion would be visiting Hristos Greek Monastery which is built on an extremely peaceful hill which also happens to have a great view of Yassiada and Sivriada. After that, we recommend trying out the beautiful cafes and restaurants along the pier. Kinaliada Public Beach, Kamo’s Beach Club and Yali Beach are the good swimming locations in the island. There is also the Kinali Ada Water Sports Club which has an Olympic pool just near the beach with a great view of the Istanbul.