How about a boat tour on the magnificent Bosphorus of Istanbul?

Bosphorus is surely one of the best places to visit during your Istanbul trip. The view of the Bosphorus, is spectacular. Istanbul is divided into two continents by the Bosphorus. And also connecting the world's two most important seas, the Sea of Marmara and the Black Sea. Get ready to see the pearl of Istanbul with a hop on hop off Bosphorus Tour!

Use your Istanbul Tourist Pass to hop on and off this perfectly planned Bosphorus Tour as many times as you like. It will be one of your favorite view in Istanbul and you will definitely want to see it again!

Discover the highlights on the European and Asian shores

Limited Passengers - To reduce crowds, the number of passengers are limited

Hop on and see the best of Istanbul by sea!

Only in Istanbul can you sail between the continents of Europe and Asia! Enjoy exactly that as you see and explore the magnificent palaces scattered around the city without getting stuck in traffic! Use your Istanbul Tourist Pass to hop on and off as much you wish on this fascinating Bosphorus Tour. Simply hop-off at any stop, enjoy the area and hop-on the next boat.
You must board the boat for the first time at Kabataş Port. The first stop after this is Beşiktaş where you can visit the Naval Museum. Hop back on the boat and continue to Emirgan to see the famous Yellow Mansion and a lovely park where every April you can visit the International Tulip Festival. Farther on, see Küçüksu Pavilion and then Beylerbeyi where there is a beautiful summer palace that belonged to the Ottoman Sultans. Finally, the boat will return to Kabataş where you can finish your trip with a look at the beautiful white marble façade of Dolmabahçe Palace.

A loop tour takes approximately 1 hour and 40 minutes without hopping off.

Take the T1 line to the Kabataş station. Walk past the gas station and you will find the port on your right hand side. Please present your pass ID to the ONLINE TICKET COLLECTION POINT window in the pier.

Your first boarding must be at the pier of Kabataş.

After you first board the boat at Kabataş, you can hop-on and hop-off at any stop until you complete one full circuit.

You can not board again after completing a full loop.

Keep in mind that due to weather conditions, boats may be delayed or canceled.

A strait that separates Europe and Asia, one of the oldest continents in the world, and a strait dividing a city into two: the Bosphorus. The view of the Bosphorus, which has witnessed the rise and fall of civilizations throughout history, is worth seeing. When we say Istanbul, the Bosphorus undoubtedly leads to the best places to visit.

The Bosphorus divides Istanbul into two continents. It also connects the two critical inland seas of the world, the Sea of Marmara and the Black Sea, as a natural strait that is rarely seen in the world.

3 Bosphorus bridges are connecting Istanbul into the Bosphorus today. These are July 15 Martyrs Bridge (better known as the Bosphorus Bridge), Fatih Sultan Mehmet Bridge (also known as the FSM Bridge) and Yavuz Sultan Selim Bridge. According to the construction order, the bridges are named by numbers from the newest to oldest among the Turks. (The First, The Second, and The Third Bridge, respectively).

Hop-on Hop-off Bosphorus Tour offers its valuable visitors the opportunity to experience the pleasure of watching the palaces scattered all over the city’s waterfront. Via a Bosphorus tour, without being stuck in traffic, you can enjoy your time alone or with your loved ones. You can also visit lots of Bosphorus restaurants with a magnificient view, hotels with Bosphorus view, and a café with a magical Bosphorus view with Istanbul Tourist Pass.

The boat first departs from Kabataş Port, and the next stop is Beşiktaş, which is home to the Naval Museum. The Naval Museum is Turkey's most extensive museum in its category and houses more than 20,000 artifacts from Turkey's maritime history, from sultanate boats to ship models, sailor clothes, and flags. It was first established in 1897 and has undergone many changes in the 20th century.

The Modern Istanbul Naval Museum foundations were laid in 1961, and it was transferred to its present location in the same year. This large museum currently has three floors and has four large halls and 17 rooms, all covering a total area of 1500 m2.

Things To Do in Emirgan

The next stop of the boat, Emirgan, is on the list of places worth visiting by hosting the Yellow Kiosk and the International Tulip Festival every April.

The Yellow Kiosk, which was built by İsmail Pasha from the Khedive family between 1871-1878, has the appearance of a bird's nest, an expression of respect and art of the Turks. It has three rooms upstairs and four rooms downstairs. The mansion, which exhibits the most beautiful examples of decorative art with its flower motifs, oil painting figures, and exterior decorations like a delicate wedding dress, serves as a café and restaurant that must be visited while in town.

The International Tulip Festival, on the other hand, will be one of the sights that those who come to Istanbul in April will encounter in the city. There are beautiful tulips planted all over the city during this time. The International Istanbul Tulip Festival, held every year in April, also makes Emirgan Park in Sarıyer one of the best places to enjoy the fragrant flowers. Walking in Emirgan Park is a relaxing experience with the calmness of the plants.

As you progress by boat, Küçüksu Pavilion and Beylerbeyi, where the summer palace of the Ottoman Sultans are located, come into view. Many palaces in Istanbul were built with an east-west architectural synthesis in the late Ottoman period and are still in good condition. The Küçüksu Pavilion is one of the mansions built with this approach.

This final version of the pavilion has a distinctly western influence and is shaped in style used for the Dolmabahçe Palace and the Ihlamur Pavilion. The mansion, built in the 18th century during the reign of Mahmud I, was demolished and rebuilt by Sultan Abdülmecid I.

After Abdülmecid, some more decorations were added. Küçüksu Pavilion, which went through significant restoration in 1994, is now open to visitors. After the transformation, its surrounding garden was turned into a park that the public could use.

Finally, the boat will return to Kabataş, and you can finish your tour with a glimpse of the beautiful white marble façade of Dolmabahçe Palace. In short, Hop On Hop Off Bosphorus Boat Tour departs from Beşiktaş and comes to Beşiktaş after the tour. You can explore this magnificent district of Istanbul before or after the tour.

Things To Do In Beşiktaş

The shores of the Bosphorus are home to many magnificent palaces and mansions such as Dolmabahçe Palace, Çırağan Palace, Aşiyan Museum, Anadolu Hisarı and Rumeli Hisarı. You always have the chance to hop off the boat and visit a beautiful tourist attraction, for instance, Dolmahçe Palace. After enjoying the venue, hop on to the next boat to continue the tour!

Dolmabahçe Palace was built during the reign of Sultan Abdülmecid between 1843 and 1856. Despite being over 150 years old, it is still intact thanks to the restorations it has undergone. Dolmabahçe Palace is the largest in Turkey, with a total area of 45,000 m2. It combines many different styles in its unique architecture and looks even more magical from the sea.

Moreover, Beşiktaş is a must-see for sports fans, as it offers the opportunity to visit Vodafone Park Arena, the home stadium of Beşiktaş JK, one of the best football teams in Turkey. During this tour of Beşiktaş Stadium, which is also very close to Dolmabahçe Palace, you can also see particular areas. Beşiktaş Gymnastics Club Stadium's press lectern, VIP press hall, press conference room, and even the dressing rooms of the footballers are among them. 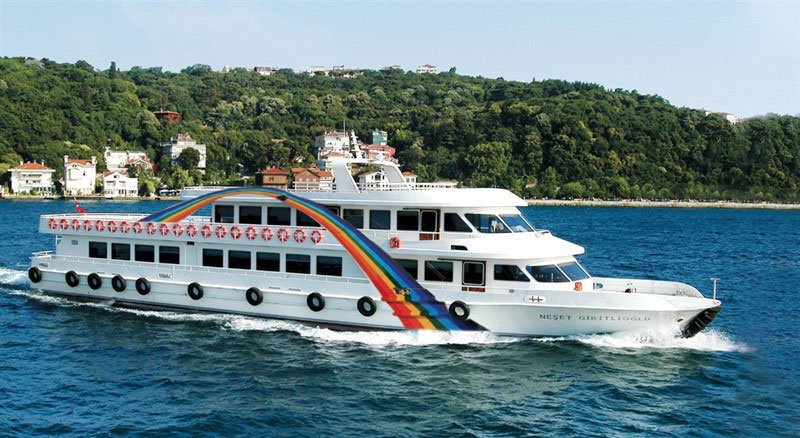 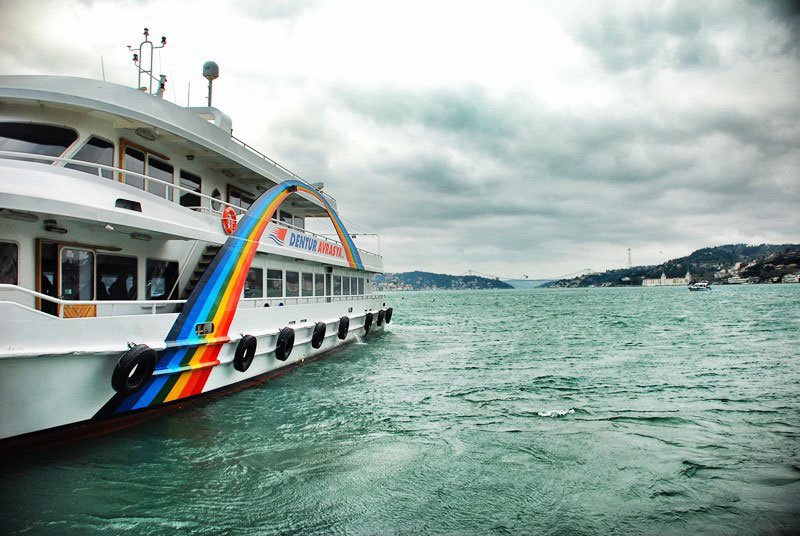 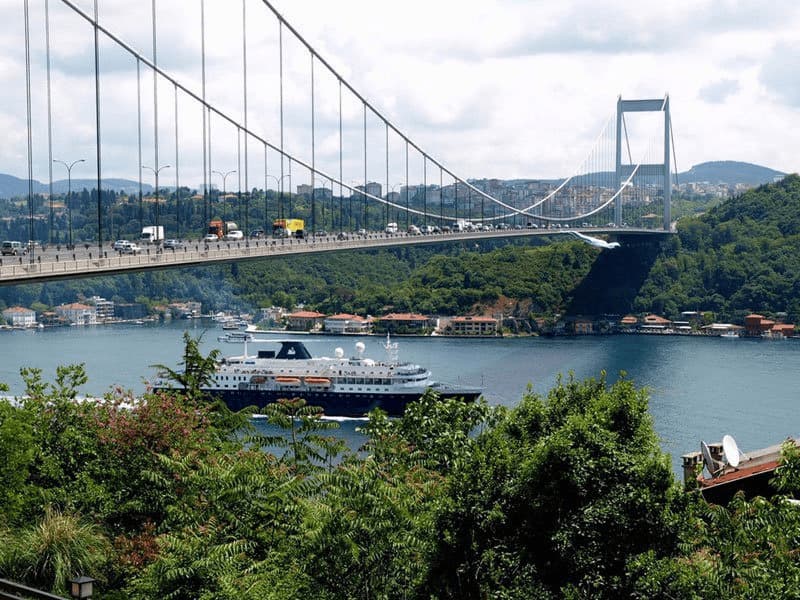 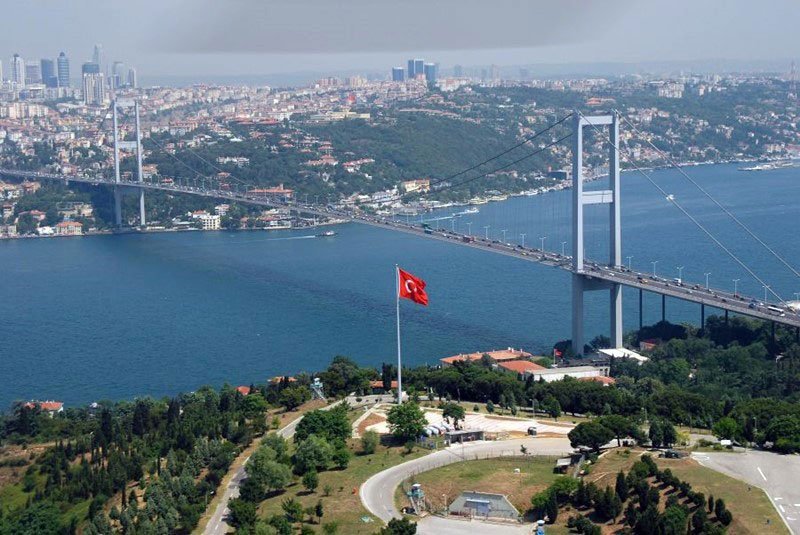 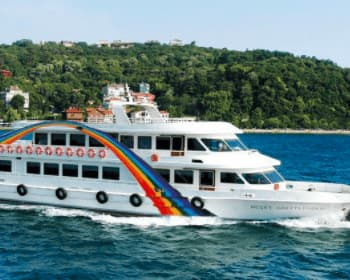 How Can I Join the Istanbul Hop-On Hop-Off Bosphorus Tour?

Hop-on Hop-off Bosphorus Tour departs from Kabataş Bay, and public transport can easily reach the pier. Once you board the boat at Kabataş, you can hop on and hop off at any stop until one entire circuit is completed.

When Can I Join the Istanbul Hop-On Hop-Off Bosphorus Tour?

How Much Time Should I Spare for the Istanbul Hop-On Hop-Off Bosphorus Tour?

A loop tour takes about 1 hour and 40 minutes without hopping off. If you want to hop off at some location to discover it in depth, the time you will spend is up to you!

Bosphorus is a strait that divides Istanbul in half, it also divides two continents: Europe and Asia.

Where is Bosphorus Situated?

Bosphorus is situated in the Marmara Sea- which is between Aegean and Black seas. It goes through Istanbul.

Do I Need to Book an Istanbul Hop-on Hop-off Bosphorus Tour?

No. You do not have to book in advance to attend this tour. Just follow the time table and keep in mind that due to bad weather conditions trips can change or cancelled.

How Many Times Can I Board?

You can board only once. You can hop off whenever you want, but you cannot get on board again.